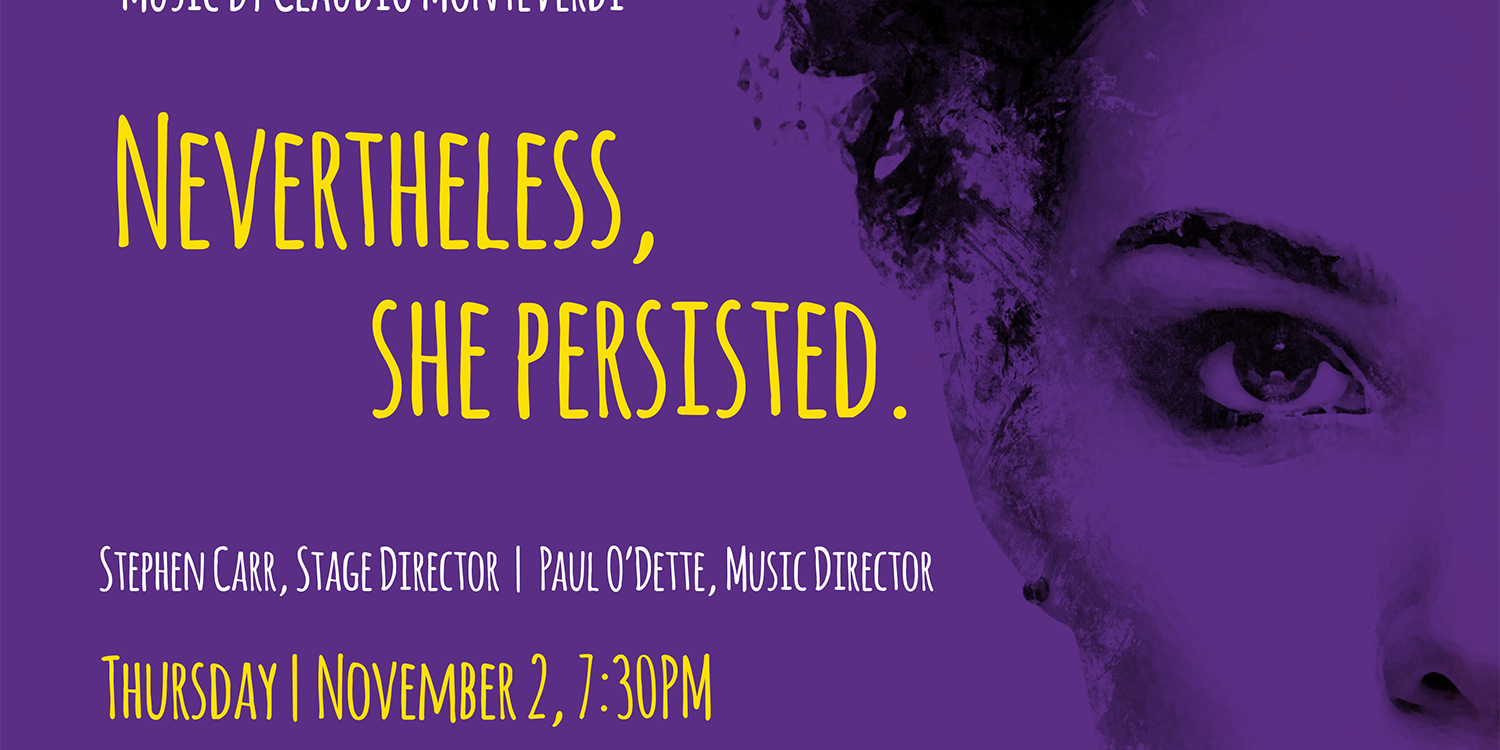 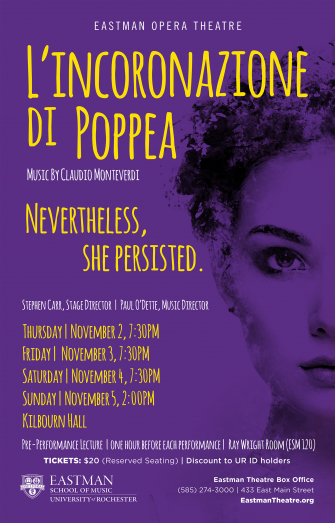 A story that is ignited with passion, drama and political intrigue in ancient Rome will be portrayed in Eastman Opera Theatre’s upcoming performance of L’Incoronazione di Poppea (The Coronation of Poppea) by Claudio Monteverdi on November 2, 3, 4, and 5 in Kilbourn Hall.  Considered Monteverdi’s final masterpiece, with libretto by Giovanni Francesco Busenello, the opera brings us the imperial court in ancient Rome in 65 A.D., an encounter with Emperor Nero and his illicit love affair with Poppea, and the intrigue of those who surround her.

The opera, which was first performed in Venice, in 1643, features three acts and set the stage for the development of the modern opera form.  The Eastman production will feature an orchestra of period instruments that closely replicate the sounds of late renaissance and early baroque music. The instruments used are historically accurate copies of period instruments – Baroque violins, violas, cello, double bass, viola da gambas, Baroque trumpets, harpsichords, and two t theorboes (long-necked lutes). According to music director and conductor Paul O’Dette, Eastman’s Professor of Lute, “This is the instrumentation documented in the accounts of the time. This will be one of the very few modern performances that takes the original instrumentation seriously and does not try to turn the ensemble into a larger orchestra, which did not exist in Venetian opera theaters of the time.”

The stage director is Associate Professor of Opera and Musical Theatre Studies Stephen Carr, who said, “Though it premiered in 1643 and is one of the oldest operas still being performed regularly today, L’Incoronazione di Poppea’s themes could not be more contemporary. We are transported to the final days of the Roman Empire, when the world’s greatest superpower was being torn apart by greed, corruption, class inequality, and a hot-headed ruler more consumed by his own narcissistic intrigues than the demands of his office. Ignoring the advice of his own advisors and scholars, Nero is easily manipulated by Poppea, in whom he sees reflected his own insatiable ambition.

“In its historical context, Poppea is a cautionary tale; though it ends with a seemingly joyful coronation, Monteverdi’s audience knew that Poppea and Nero’s triumph was short-lived.”

A minimum of three productions are mounted yearly, each within a different-sized performance venue at the Eastman School, including the recently renovated 2300 seat Kodak Hall at Eastman Theatre, the 450-seat Kilbourn Hall, and the 75-seat Opera Studio. Productions feature a wide range of musical styles, most are performed in the original language, and depending on the venue, many use full orchestral accompaniment. Studio productions, scenes programs, and outreach events are also presented to further enhance the variety of performance experience. Eastman Opera Theatre utilizes a “class and degree blind” approach to casting, meaning that roles go to the singer with the best audition, starting their Junior year in school and with the approval of their studio voice teacher. Most of our productions feature a mix of upper class undergraduates (juniors and seniors), masters, and doctoral students. Recent productions include Bellini’s I Capuleti e i Montecchi; Mozart’s Cosi fan tutte, Le nozze di Figaro; Donizetti’s L’elisir d’amore; Puccini’s La Rondine and La Bohème; Britten’s A Midsummer Night’s Dream and Albert Herring; Kander and Ebb’s Cabaret; Sondheim’s A Little Night Music, Sweeney Todd and Assassins; Floyd’s Susannah; Handel’s Xerxes, Orlando; Rossini’s Il Turco in Italia; Ravel’s L’enfant et les sortileges; Bock’s She Loves Me; Poulenc’s Dialogues of the Carmelites; Lehár’s The Merry Widow and Weill’s Street Scenes.

About 900 students are enrolled in Eastman’s Collegiate Division – about 500 undergraduate and 400 graduate students. Students come from almost every state, and approximately 20 per cent are from other countries. They are guided by more than 95 full-time faculty members. Seven Pulitzer Prize winners have taught at Eastman, as have several Grammy Award winners. Each year, Eastman’s students, faculty members, and guest artists present more than 700 concerts to the Rochester community.