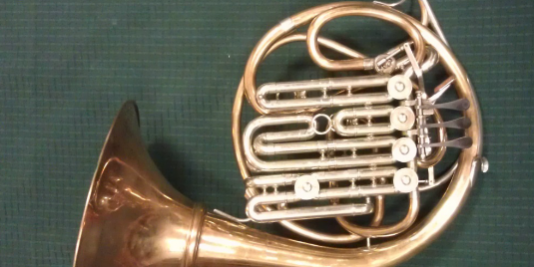 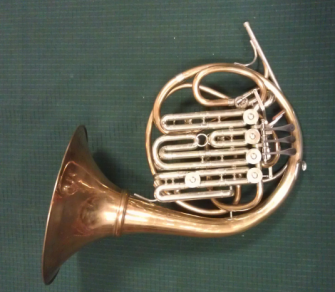 Musician, hornist and collector Charles Valenza (BM ’50, MM ’53) will have several of his renowned collection of twenty-eight horns, from the late 18th century to the mid-20th century, featured in a performance on Sunday, October 15 at 7 pm in Kilbourn Hall, at the Eastman School of Music. This special, free performance is part of the Eastman/University of Rochester Meliora Weekend and is titled “Cornucopia: A concert featuring historic horns from the Charles Valenza collection.” The program will include music by Mozart, Strauss, Brahms, and others, as well as a massed ensemble of 30 members of the Eastman Horn Studio, directed by Professor of Horn Peter Kurau.

The collection consists of instruments by renowned makers from around the world, including Paxman of London; Carl Geyer of Chicago; Gebr. Alexander of Germany; Lidl–Brno, Czechoslovakia; C.F. Schmidt, Berlin; Antoine Halari of Paris; and many others.  The instruments include antique horns, natural horns, double horns, and triple horns, as well as a hunting horn.

“The Charles Valenza collection is one of the most iconic horn collections in private ownership in the world, and was constituted to show the history and development of the horn from its early roots as an instrument used in the hunt (trompe de chasse), through the natural-horn era, the advent of valves, and ultimately to the present day,” said Professor Kurau.  “It is distinctive not only in its breadth, but also in that it is a collection that is intended to be played, and not simply viewed in a museum setting. We at the Eastman School are very fortunate to bring this collection to sonic life in our concert on October 15.”

Charles Valenza stated,  “I’m delighted that Professor Kurau is having several students play on some of my horns in the upcoming concert. Peter has informed me that three of the selections will be played on natural horns (the horns that were used for centuries before valves were invented.) This should be fascinating for many listeners. I look forward to being there.”

Mr. Valenza, a well-known musician, horn player, and attorney in the Rochester, New York, area, studied horn with the legendary Arkady Yegudkin (“The General”) and won a coveted Performer’s Certificate at the Eastman School of Music in 1950.  In 1951, he enlisted in the United States Air Force and was stationed with the 144th/145th Air Force Band at the Sampson Air Force Base near Geneva, New York. Mr. Valenza played first horn in the band and conducted the Sampsonaires Airmen’s Chorus, which toured extensively and appeared on the Arthur Godfrey and Ed Sullivan TV shows. After his discharge from the Air Force in 1955, he entered the University of Michigan Law School. After he had graduated in 1957, he returned to Rochester, where he enjoyed a successful legal career until he retired. He practiced with two firms in Rochester and, for several years, he was the County Attorney (the chief legal officer) for the County of Monroe, which includes the City of Rochester.

The performance is free and open to the public. For more information about the Eastman School of Music, click: www.esm.rochester.edu.