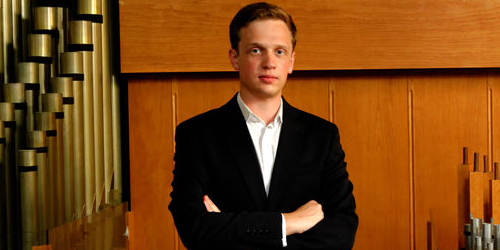 Eastman School of Music DMA and Artist Certificate candidate Thomas Gaynor has won First Prize Interpretation and Audience Prize in the 2017 St. Albans International Organ Festival Competition, one of the leading competitions in the world. The competition was held in St. Albans, UK on July 10 – 22. Gaynor, who is from New Zealand, competed against organists from around the globe in the 29th edition of the competition and performed a solo recital followed by a concerto at St. John’s Smith Square in London with the with Royal Academy of Music Chamber Orchestra.

“The St. Albans Competition is one of the oldest international organ competitions in the world, and its winners have gone on to become leaders of the profession the world over” said Eastman Professor of Organ, David Higgs. “It is a grueling competition, requiring the competitors to prepare more than two hours of music, and to perform on a number of national and historical styles of instruments. Thomas is an immensely talented musician, and he has worked tirelessly to develop and refine that ability.”

“With six recitals on 5 different organs over 2 weeks, this competition certainly keeps you on your toes” said Gaynor.  “I found it extremely demanding, yet also such a great learning experience having to balance having so much music at the ready. It really felt like a marathon, as after each performance you know that there is still so much more playing to come (alongside the anxiety of wondering whether or not the jury will let you through to the next round.) It was a wonderful feeling as I played the Poulenc organ concerto in the final round, knowing that I’d jumped through quite a few fiery hoops already and that whatever the result might be, it was an honor to have advanced so far through the competition.”

The Competition is part of the 29th St. Albans International Organ Festival is held every two years in historic venues around the District of St. Albans. Thomas’ win includes a one-year touring contract in the USA, a solo recording, and a cash prize of $8,000. https://www.esm.rochester.edu/organ/