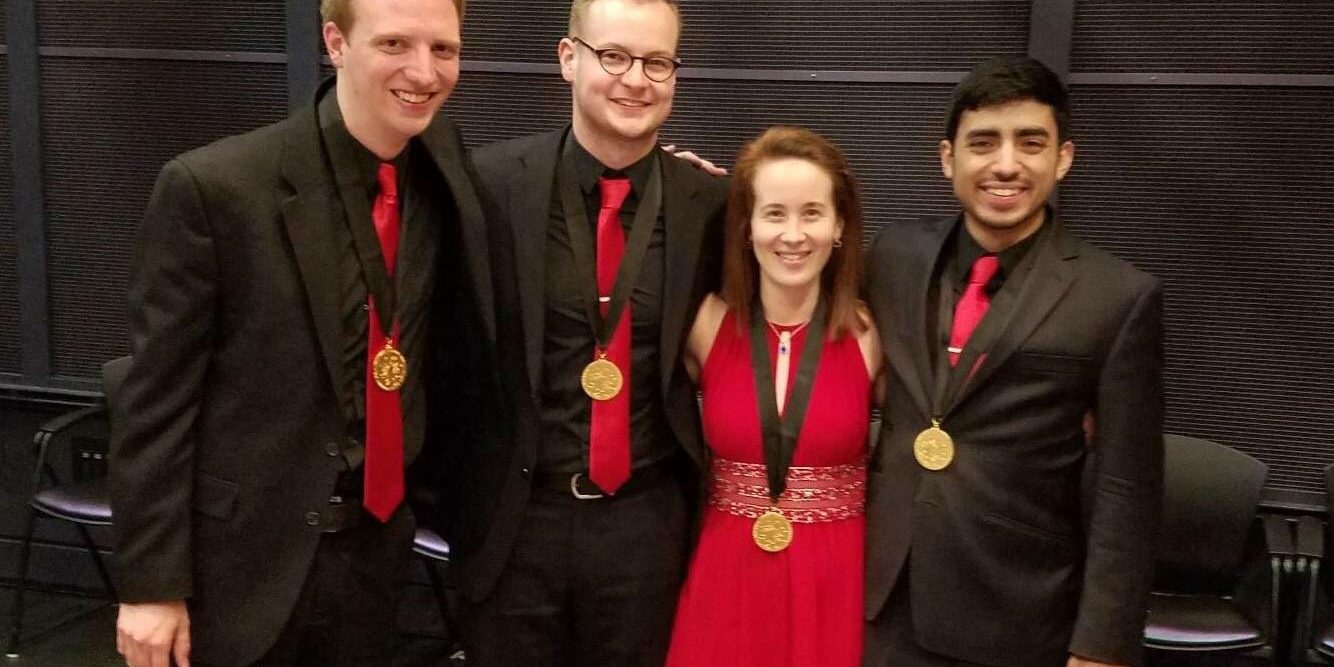 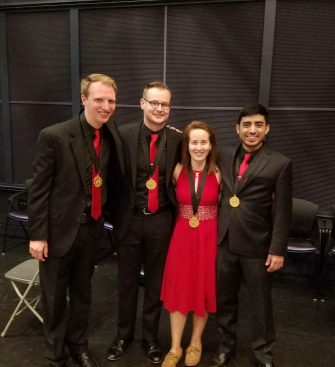 Members of the The Fuego Quartet are, from left, Erik Elmgren, Harrison Clarke, Nicki Roman, and Gabriel Piqué.

The Fuego Quartet, a saxophone quartet composed of graduate students from the University of Rochester’s Eastman School of Music, was awarded a Gold Medal in the 44th annual Fischoff Competition. Sponsored by the Fischoff National Chamber Music Association, the competition is the largest and one of the most prestigious chamber music competitions in the nation.

The ensemble, which won the top prize in the Senior Wind Division, is composed of Nicki Roman, soprano saxophone, who will be in the third year of her Doctor of Musical Arts degree program this fall; and Master of Music degree students Erik Elmgren, alto saxophone, Harrison Clarke, tenor saxophone, and Gabriel Piqué, baritone saxophone. The three master’s students will be graduating from Eastman this Sunday, May 21. The quartet was founded in 2015 and is coached by Associate Professor of Saxophone Chien-Kwan Lin.

At the Fischoff Competition, which was held May 12 to 14 on the campus of the University of Notre Dame, the Fuego Quartet performed Gregory Wanamaker’s Speed Metal Organum Blues; Scarlatti’s Sonata in F minor, K. 519; Recitation Book by David Maslanka; Fantasy Etudes by William Albright; Tango Virtuoso by Thierry Escaich; and Introduction et Variations sur une ronde populaire by Gabriel Pierne.  As winners in the competition, the quartet will be performing a tour of the Midwest this fall.

The Fuego Quartet has been featured in a variety of settings from standard concert halls to community outreach events. They have performed at the Strong National Museum of Play, the George Eastman Museum, the National Susan B. Anthony Museum and House, the Central Library of Rochester and Monroe County, and the Phyllis Wheatley Community Library.