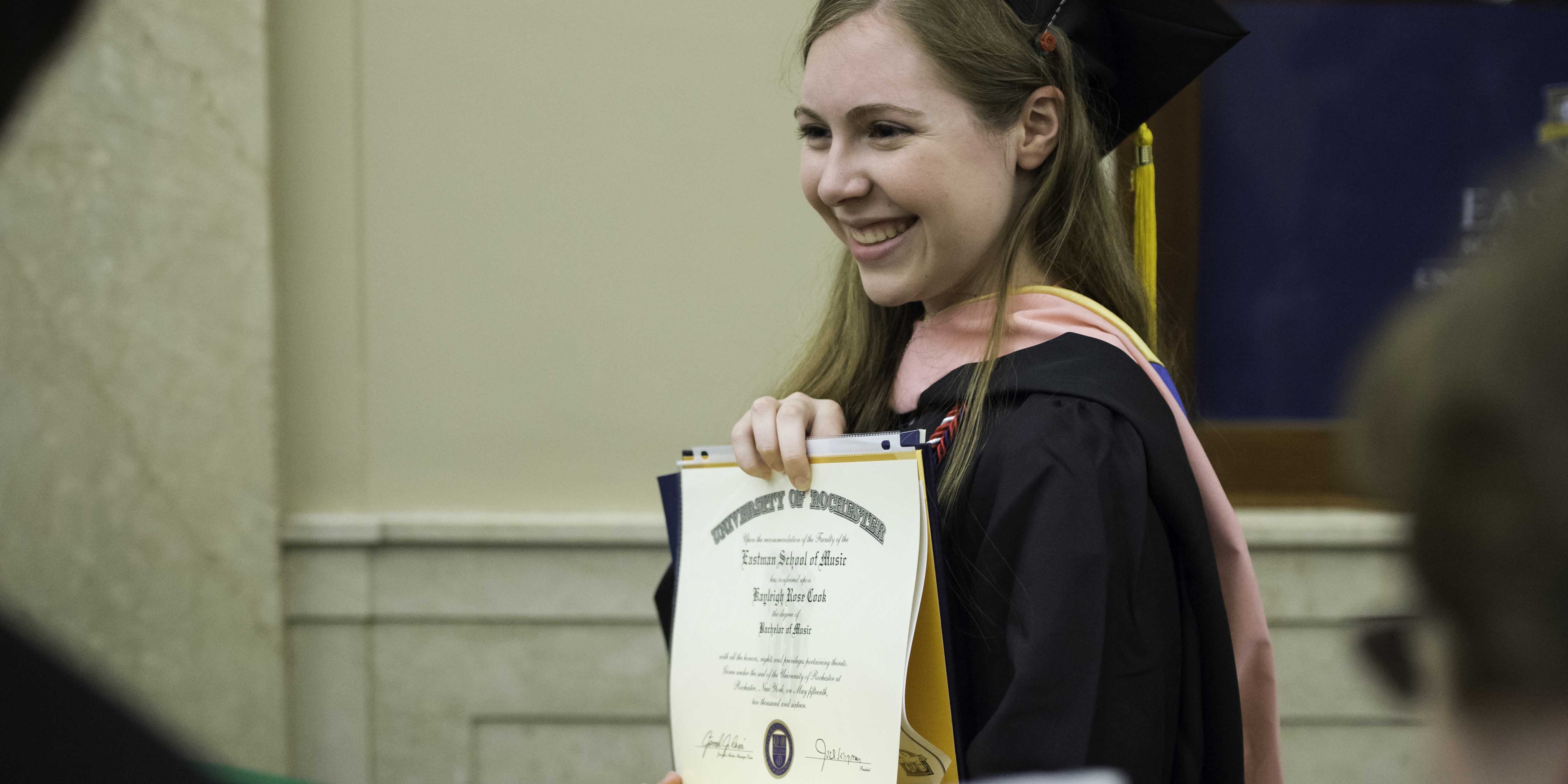 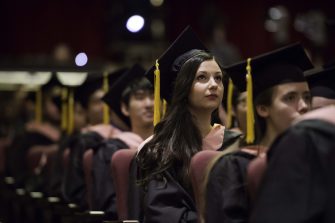 The annual commencement for Eastman School of Music bachelor’s and master’s degree students will take place on Sunday, May 21, with composer and pianist Jake Heggie giving the commencement speech and composer and librettist Gene Scheer receiving the School’s Distinguished Alumni Award.

The Sunday ceremony, which starts at 11:15 a.m. in Kodak Hall at Eastman Theatre, is for students receiving their Bachelor of Music, Master of Arts, and Master of Music degree. The ceremony for students receiving a Doctor of Musical Arts and Doctor of Philosophy degree will be held at 9 a.m. Saturday, May 20, in Kodak Hall. Approximately 260 candidates will receive their undergraduate and graduate degrees during the School’s 92nd annual commencement.

Scheer, who received his bachelor’s and master’s in music degrees at Eastman in 1981 and 1982, respectively, was nominated for a Grammy Award for his work with composer Steven Stucky on the oratorio August 4th, 1964. He has worked as a librettist with Tobias Picker on the operas An American Tragedy and Thérèse Raquin.  Other collaborations include the lyrics for Wynton Marsalis’s It Never Goes Away and the operas Cold Mountain with composer Jennifer Higdon and Everest with Joby Talbot.

Scheer and Heggie have collaborated on many projects, including Out of Darkness and Into the Fire, which were presented by Eastman Opera Theatre this year; the critically acclaimed opera Moby-Dick; the opera Three Decembers and the choral opera The Radio Hour; and the lyric drama To Hell and Back. The duo also worked on an operatic adaptation of It’s a Wonderful Life, which received its world premiere by Houston Grand Opera in December 2016.

Heggie’s other operas include Dead Man Walking, Great Scott, and At the Statue of Venus. He has also composed more than 250 art songs as well as concerti, chamber music, and choral and orchestral works. A Guggenheim Fellow, Heggie has served as a mentor for the Washington National Opera’s American Opera Initiative and is a frequent guest artist at universities, conservatories, and festivals. He has worked as a composer and pianist with some of the world’s most loved singers, including Renée Fleming, Patti LuPone, Audra McDonald, and Bryn Terfel.

Monahan joined the Eastman faculty in 2008. He teaches fundamentals of music theory courses, which he reshaped and redesigned; oversees and mentors the teaching assistants; and created a graduate pedagogy course.  As a researcher, Monahan has published widely in leading music theory journals on a range of topics, including form in classical and Romantic instrumental music, post-Wagnerian harmony, and the rhetoric of music theory. He is the author of the book Mahler’s Symphonic Sonatas and the recipient of the Society for Music Theory’s Emerging Scholar Award.