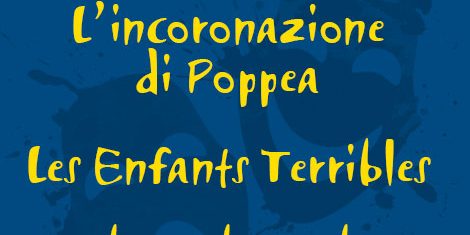 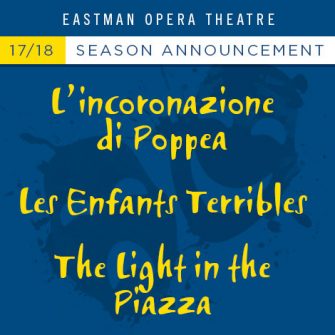 The Eastman School of Music’s opera program has been praised for its thoughtfully directed, professional-level, and risk-taking productions featuring brilliantly talented singers. Next year’s presentations of L’incoronazione di Poppea, Les Enfants Terribles, and The Light in the Piazza will “showcase the breadth and depth of Eastman Opera Theatre and its student performers,” said Professor of Opera and Eastman Opera Theatre Artistic Director Steven Daigle.

Credited with bridging the musical transition from Renaissance to Baroque, Claudio Monteverdi wrote L’incoronazione di Poppea (“The Coronation of Poppea”) in the early 1640s. Revolving around an adulterous love affair between the Roman emperor Nero and his mistress Poppea, the opera is considered Monteverdi’s masterpiece, featuring glorious music and a compelling story that upends morality without tragic consequences. The work will be presented Nov. 2, 3, 4, and 5 in Kilbourn Hall.

Les Enfants Terribles, by Philip Glass and Susan Marshall, is based on Jean Cocteau’s 1929 novel about isolated siblings who play growingly dangerous mind games. The plot evolves through both singers and dancers, whose choreography adds another layer of meaning to the characters’ words. The work will be presented Feb. 1, 2, 3, and 4, 2018, in Room 804 of the Eastman School Annex.

Adam Guettel’s The Light in the Piazza had its Broadway premiere in 2005. With music incorporating elements of Sondheim, Broadway, and opera, the work won six Tony Awards. It follows the poignantly romantic yearnings of a surprisingly childish young woman and her overprotective mother, on holiday in Florence, Italy, in 1953. Eastman Opera Theatre will present the work April 5, 6, 7, and 8, 2018, in Kodak Hall at Eastman Theatre.

More information on Eastman Opera Theatre productions, including admission, times, and pre-performance lectures, will be available this fall.