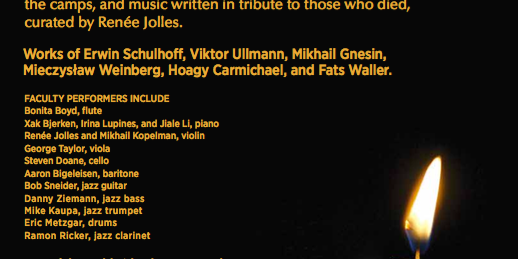 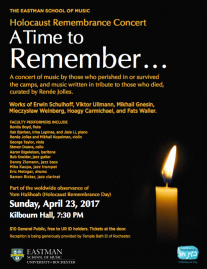 Eastman School of Music faculty members, students, and alumni will join the worldwide observance of Yom HaShoah by performing a Holocaust Remembrance Concert at 7:30 p.m. Sunday, April 23, in Kilbourn Hall.

Titled “A Time to Remember . . .”, the concert features music written by those who perished or survived the World War II concentration and work camps as well as music written in tribute to those who died. The series of annual concerts was launched in 2014 by Associate Professor of Violin Renée Jolles. Her father, Jerome Jolles, buried bodies as part of a work detail in Romania during the Nazi occupation. He survived and came to the United States, where he finished his studies at Juilliard in music performance and composition. A virtuoso accordion player, piano teacher, and composer, Mr. Jolles died in January 2014.

The concert will features works by Erwin Schulhoff, who died of tuberculosis at the Wülzburg concentration camp; Victor Ullman, who died in the gas chambers at Auschwitz-Birkenau; Russian Jewish composer Mikhail Gnesin; and Polish Jewish composer Miezcsyslaw Weinberg. The concert will conclude with performances of works by Hoagy Carmichael and Fats Waller in a jazz tribute to the Fritz Weiss Quintet and the Ghetto Swingers, groups which performed in the terrible conditions of the concentration camp Terezin.

Admission to the “A Time to Remember . . .” concert is $10 for the general public, free to UR ID holders. Tickets are available at the door.  A reception provided by Temple Beth El of Rochester will be held after the concert.