The Life, Music of Bill Holman Revealed in His Own Words 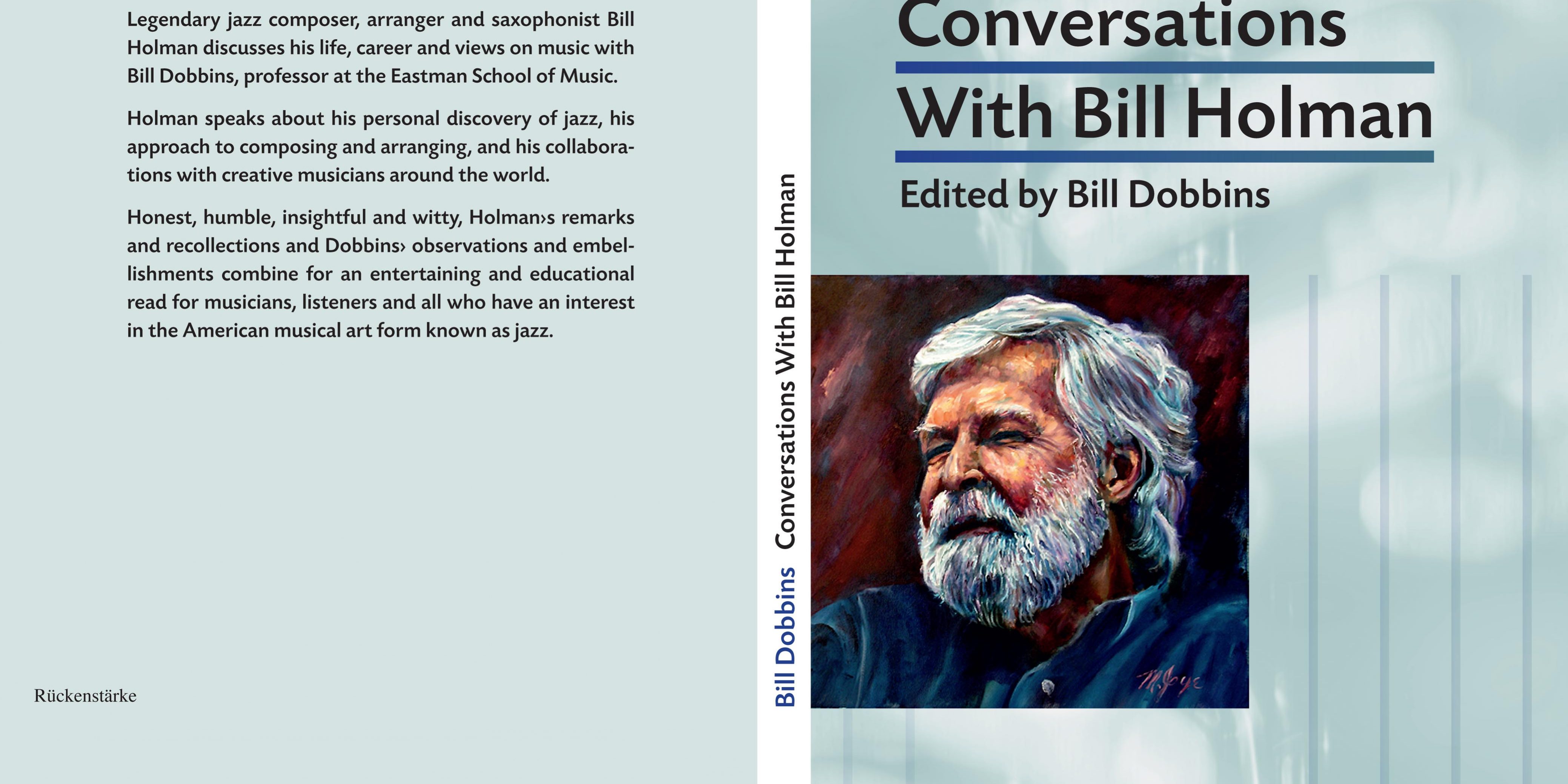 Jazz pianist and Eastman School of Music professor Bill Dobbins was surprised no one had ever talked to legendary composer/arranger Bill Holman about his life and music.  So Dobbins traveled to the California home of the National Endowment for the Arts Jazz Master, where he recorded Holman’s reflections on his career and his thoughts on composing, arranging, and the creative process.

Those interviews form the backbone of Dobbins’s book, Conversations with Bill Holman. Published this month by Advance Music—coincidentally, sponsors of a jazz workshop in Germany in 1985 where the two men met while teaching—Holman’s words are complemented by Dobbins’s own observations and follow-up questions, home and performance photos, a selected discography, and 25 pages of tributes from friends and fellow musicians.

Before starting, Dobbins compiled his own questions and solicited others from colleagues, including Eastman faculty member and composer/conductor Dave Rivello; pianist and University of Akron jazz program founder Roland Paolucci, whose photos of Holman are included in the book; and composer/arranger Heinz Czadek, whose essay on Holman and humor in music introduces the book.

In the tight world of jazz, Dobbins also received assistance from the father of a former Eastman student whom he met in California. The man, Hollywood orchestrator Brad Dechter, suggested and then solicited the tributes for Conversations with Bill Holman and also proofread the book.

Asked what surprised him the most as he interviewed Holman and edited the book, Dobbins noted, “Holman’s approach to composing and arranging is completely intuitive. Though he had some studies in those subjects, the musical language he uses was learned through his childhood listening to the radio when big bands and jazz were prominent on the air waves.”  That intuitiveness was further honed, Dobbins said, as Holman absorbed harmonic and chord progressions by listening and playing as he built his career.

One of the questions Dobbins posed to Holman was, “What are you thinking as you write”? to which the reply was, “A lot of questions, because without constant questions the piece wouldn’t get written.”  Dobbins acquiesces, noting how composers continually ask themselves, “Can I keep this idea going”,  “Is this the time for a contrasting idea”, and numerous similar questions as they write.

Still, Holman’s composition work stands out for its unique musical voice. “His work has a clearly identifiable sound,” said Dobbins. “People can immediately recognize a Holman piece or arrangement.”

Holman has been in-demand as a composer and arranger for six decades, enjoying a long association with Stan Kenton and working with such artists as Mel Lewis, Count Basie, Tony Bennett, Bob Brookmeyer, Michael Bublé, Natalie Cole, The Fifth Dimension, Gerry Mulligan, Sarah Vaughan, and many others.  He has received 14 Grammy nominations, three Grammy awards, DownBeat Reader’s and Critic’s Poll honors as “Best Arranger,” and other awards, and was named an NEA Jazz Master, the nation’s highest award for jazz artists, in 2010.

Dobbins has performed with classical orchestras and chamber ensembles under the direction of Pierre Boulez, Lukas Foss, and Louis Lane, and has performed and recorded with such jazz artists as Clark Terry, Al Cohn, Red Mitchell, Phil Woods, Bill Goodwin, Dave Liebman, Kevin Mahogany, Paquito D’Rivera, Peter Erskine, and John Goldsby. He taught at Eastman from 1974 to 1994, when he became principal director of the WDR Big Band in Cologne, Germany, and returned to the Eastman faculty in 2002.

Holman, who will celebrate his 90th birthday in May, has connections to Eastman that reach back a quarter century, when he directed the School’s “Arrangers Holidays” jazz program for a few summers following the 1990 death of program founder Rayburn Wright. He’s been in residence at Eastman several times since 2002, most recently in February 2016 when the Eastman Jazz Ensemble premiered his work Arbitration.

In the absence of a biography on Holman, Dobbins said he tackled the project “to document one of the most influential jazz composers and arrangers after Ellington and Strayhorn.” But the process to record Holman’s legacy for future generations also had a more personal result: During his visit to California, Dobbins learned that all of Holman’s friends call him “Willis,” the composer’s given name. He now calls Holman “Willis,” too, and receives correspondence from the jazz icon signed simply, “W.”

Conversations with Bill Holman, which was supported with funding from the Eastman School of Music’s Professional Development Committee, is available on Amazon and may be ordered from Advance Music, Mainz, through the Eastman Bookstore.