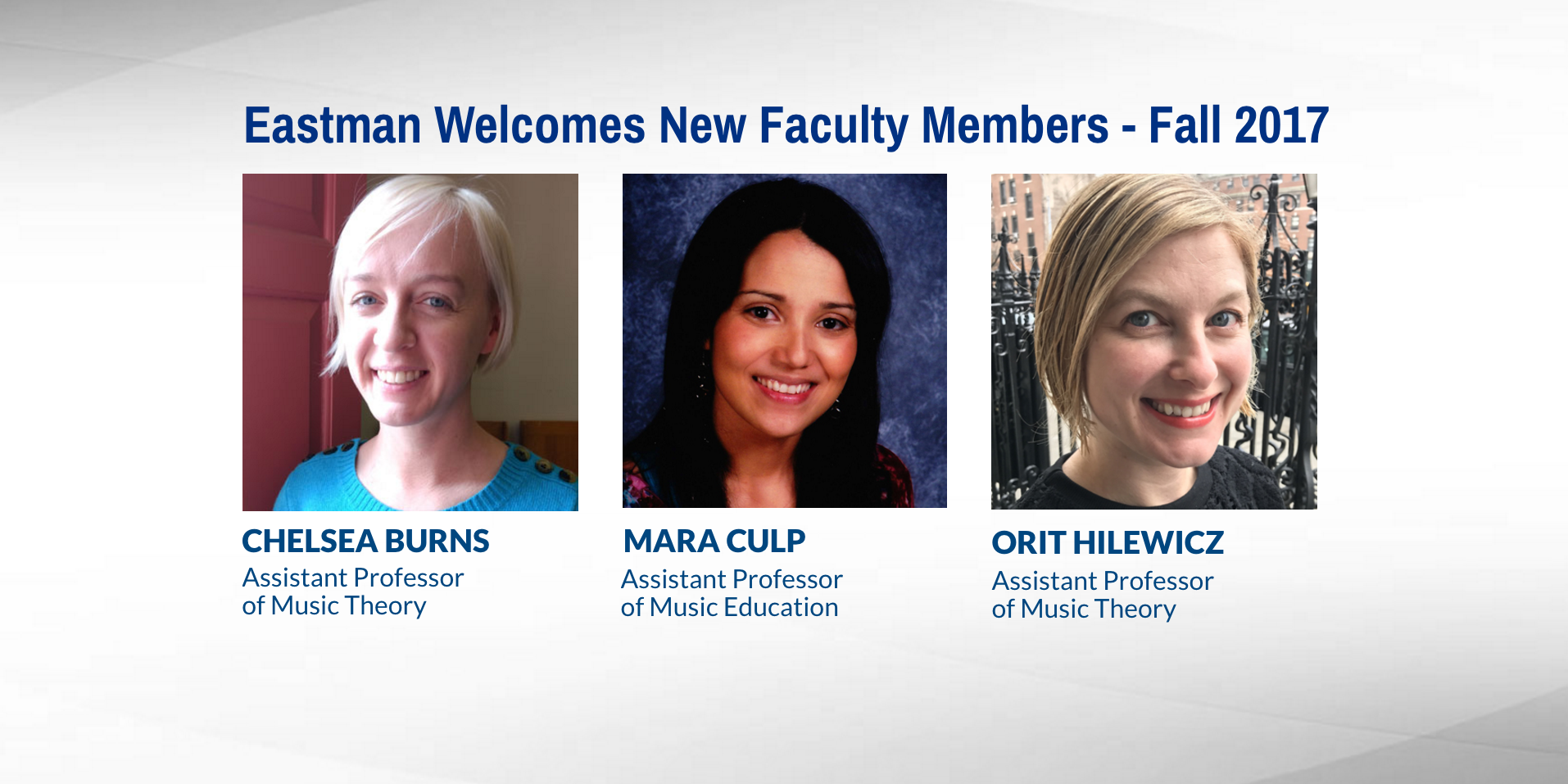 ROCHESTER, N.Y.—The University of Rochester’s Eastman School of Music has announced the appointments of Chelsea Burns and Orit Hilewicz as faculty members in the Music Theory Department, and of Mara Culp as a faculty member in the Music Teaching and Learning Department. They will begin teaching at Eastman during the 2017-2018 academic year.

“I am excited by the wide ranging research interests of these very accomplished individuals, and the energy and commitment to teaching excellence that they will bring to our students,” said Jamal Rossi, the Joan and Martin Messinger Dean of the Eastman School of Music. 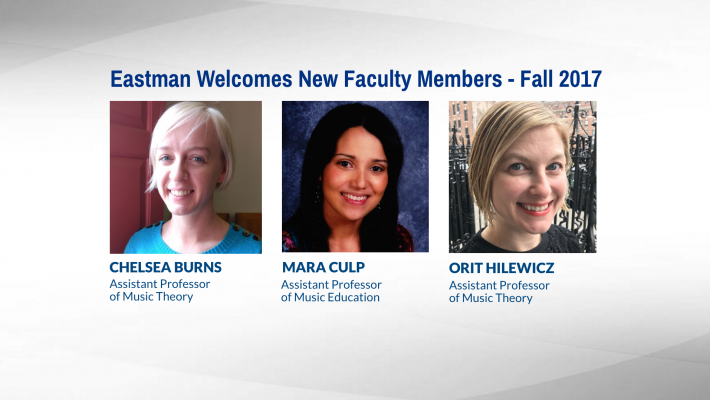 Burns is a Preceptor of Music at Harvard University. She completed her PhD in the Theory and History of Music at the University of Chicago in 2016. Her research interests include U.S. old-time, bluegrass, and country musics; Latin American modernisms; popular music of the Americas; and the historiography and pedagogy of music theory. Her dissertation, “Listening for Modern Latin America: Identity and Representation in Concert Music, 1920–1940,” addresses Mexican and Brazilian compositions written during an especially turbulent political period. Through close readings of works by Heitor Villa-Lobos, Silvestre Revueltas, and others, Burns argues for multiple contexts and communicative possibilities for these compositions, often in ways that undermine official nationalistic narratives and mandates or reveal composerly ambivalence. In doing so, she contests analytical approaches in which folk tunes and samba rhythms are strictly features of homogenized nationalistic cultures.

Burns has presented her research at national conferences of the Society for Music Theory, the Society for American Music, and the Latin American Studies Association. Her articles are currently under review for publication in Music Theory Online and The Journal of Musicology. Her research has been supported by an ACLS/Mellon Dissertation Completion Fellowship, a U.S. Department of Education Title VI Foreign Language and Area Studies (FLAS) Fellowship, and grants from the Tinker Foundation and the Center for Latin American Studies at the University of Chicago.

In her teaching, Burns draws upon diverse repertories to engage students of different musical backgrounds and interests. At Harvard, University of Chicago, and Truman College, she has taught core theory courses, introductory music criticism and analysis courses, and topical classes such as “Country Music Studies” and “What is Musical Form?”.

Hilewicz is a PhD candidate at Columbia University. She researches the ways music analysis reflects the experience of performing and listening, while at the same time broadening and enriching those experiences. Focusing on 20th century music composed in the United States and Europe, Hilewicz’s interests include music and visual arts, music in multimedia works, set theory, analysis of post-tonal music, and analytical approaches to musical temporality. Her dissertation, titled “Listening to Ekphrastic Musical Compositions,” studies pieces that take other artworks—such as paintings, architectural spaces, and different music works—and examines the intertextual relationships between music and images.

Hilewicz has presented her work at national and international conferences, including the annual meeting of the Society for Music Theory, the International Musicological Society, and the International Society for the Study of Time (ISST), where she was awarded the Founder’s Prize for her paper “Tracing Space in Time: Morton Feldman’s Rothko Chapel.”  Her article by the same title was published in Time and Trace, a volume produced by ISST, in April 2016.

Hilewicz’s teaching experience includes core and upper level undergraduate music theory courses at Columbia University and New York University. Two syllabi she designed, one on avant-garde composers in New York City and the other on music in multimedia works, were selected for Columbia’s Teaching Scholars Program. Before joining the Music Theory PhD program in Columbia, Hilewicz completed her Bachelor of Arts degree in piano and Master of Arts in music theory at the University of Washington in Seattle. While in Seattle, she served as managing editor of Perspectives of New Music. Hilewicz was also an associate editor of Theory and Practice in 2012–2015.

“This is an important moment for Eastman Theory. Professors Burns and Hilewicz are more than just outstanding researchers and musicians: they also are innovators, poised to lead music theory in bold new interdisciplinary directions,” said Seth Monahan, Chair of the Search Committee and Acting Chair of the Department during the search. “We’re thrilled to have them on our team.”

Culp currently is a Visiting Assistant Professor of Music Education, Vocal General, at Ithaca College. She earned a master’s degree in music education from Penn State and a bachelor’s in music education from Siena Heights University. She taught K-12 general, choral, and instrumental music in Michigan for five years and has had extensive experience working with Pre-K students as well.

Her scholarly and research interests include improving speech using music, music education for students with special needs, collaborating with special education professionals, elementary general music education, and choral music. As a PhD candidate at Penn State, she is investigating the relationship between music aptitude and phonological awareness in elementary students with speech sound disorders. Her work has been published in The Orff Echo, General Music Today, and Choral Journal; and accepted to the Journal of Research in Music Education.