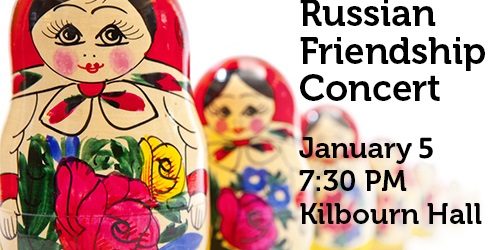 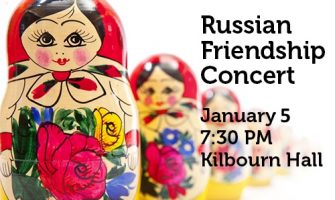 A diverse program of vocal and instrumental works by Russian composers, presented by the Eastman Community Music School and Linkages of Rochester, Inc., will celebrate Rochester’s connection to its sister city of Veliky Novgorod. The 11th annual collaborative event, titled “A Russian-American Friendship Concert,” will be held at 7:30 p.m. Thursday, Jan. 5, in the Eastman School of Music’s Kilbourn Hall.

In addition to the concert, audience members will be able to enjoy an exhibit of artwork by Rand Darrow that is inspired by Russian history, folk tales, and mythology.

Featuring faculty, students, and alumni of both the Eastman Community Music School and the Eastman School of Music, the concert will include piano works by Prokofiev, Rachmaninov, Scriabin, and Kapustin; folk songs and vocal works by Glinka and Shaporin; and a flute sonata by Prokofiev and other works for wind instruments.

The concert will be followed by a reception of Russian treats and sweets in Cominsky Promenade, located on the second floor of the Eastman School of Music.