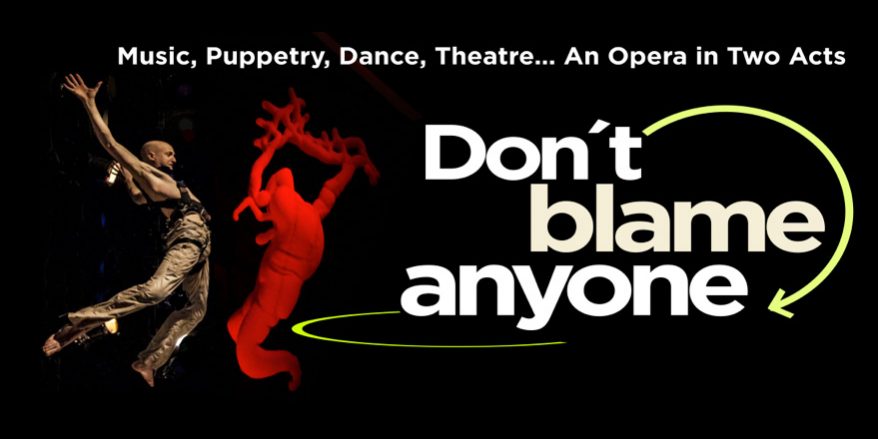 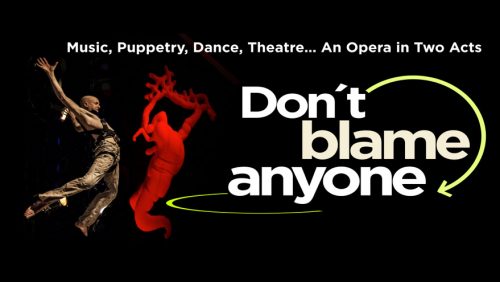 THE WORLD PREMIERE OF DON’T BLAME ANYONE

“Having the opportunity to debut this amazing multimedia operatic performance right here in our hometown means the world to Ricardo and me,” said Carlos Sanchez-Gutierrez, Chair of Composition at the Eastman School of Music. “This is the first time in sixty years that an opera composed by Eastman faculty has premiered in Kodak Hall at Eastman Theatre.”

Original drawings by internationally acclaimed Mexican illustrator/cartoonist José Ignacio Solórzano (“JIS”) were created to inspire the performance’s imaginative concept, with puppetry design and narrative inspiration drawn from celebrated aphoristic Mexican poet Raúl Aceves. Famed soprano and new music pioneer Tony Arnold plays the leading role as “the author,” who, throughout the performance, toils to create a significant work as she faces the specter of the blank page.

Don’t Blame Anyone is a collaboration of performers from U.S. and Mexico: life-size abstract puppets designed by Antonio Camacho and Olga Gamez of La Coperacha, one of the oldest theater groups in Mexico, and local physical illusionists of PUSH Physical Theatre. The groups come together on stage to represent a variety of characters from “ideas in the making,” to a human staircase. In addition, PUSH Physical Theatre Artistic Director Darren Stevenson developed the opera’s original choreography.

“The creative process has been truly collaborative at every stage of development. Each artist came to the project with a unique vision as well as an open mind,” said Stevenson. “The final work is a careful balance of music, movement, set, costume and prop design that manages to be both spectacular and intimate at the same time.”

The enigmatic and innovative production takes theatre-goers on a unique journey that begins with the elusive encounter between imagination and creativity. It progresses into the terror experienced before the blank page and climaxes with the battle against the demons of reason. The 10-scene, multimedia operatic work will be conducted by Tim Weiss with Eastman BroadBand Ensemble, a diverse group of Eastman student, faculty and alumni musicians.

Tickets for Don’t Blame Anyone are $18 for general admission, or $10 for Eastman School of Music faculty/staff and students. Tickets are on sale now and can be purchased at the Eastman Theatre Box Office online at www.EastmanTheatre.org, by calling (585) 274-3000, or in person at 433 East Main Street.

In addition to a busy touring schedule that continues to take them all over the U.S. and the world, these masters of physical storytelling were finalists on truTV’s Fake Off in 2014 (Season One), during which judge/Glee star Harry Shum, Jr. said: “You guys are superhuman!” Very involved in arts-in-education programs – often working with at-risk children – PUSH runs its own PUSH Pins Summer Camp, Teen Mentorship Project, and Summer Intensive, which attracts adult students from all over the world.

Darren and Heather are recipients of both the Anton Germano Dance Award and the Performing Artist of the Year Award from the Arts & Cultural Council for Greater Rochester, and have spoken about their unique artistic process at TEDx Rochester. PUSH has been profiled on PBS and NPR, and is represented by Robin Klinger Entertainment. More information is available at www.pushtheatre.org.

Formed at the Eastman School of Music by composers Ricardo Zohn-Muldoon and Carlos Sanchez-Gutierrez, the Eastman BroadBand is a flexible group whose aim is to explore the many facets of contemporary music-making. Its repertoire includes modern classics, such as Ligeti, Lutoslawski, Birtwistle, and Carter, as well as recent music by many living composers, including that of Sanchez-Gutierrez and Zohn-Muldoon. The BroadBand’s performances offer equal doses of rigor, precision, artistry, uncompromising furor and joy.

The Eastman BroadBand has performed internationally at Festival Internacional Cervantino, Chihuahua International Festival, and Conservatorio Nacional de Musica in Mexico; in Italy at SoundSCAPE (Maccagno), MASKfest (Bologna), and Festival SpazioMusica (Cagliari); in Spain at VIPA (Valencia), and as Resident Ensemble at the 2008 and 2010 Festival Internacional Chihuahua . Recently, the group has also performed in New York City at Symphony Space’s Sonidos festival, the Americas Society, NYU’s Casa Italiana Zerilli-Marimò , and Miller Theatre, and gave the premiere of Garth Fagan’s Edge/Joy , with the Garth Fagan Dance Company at the Joyce Theatre. The group recently toured Western Mexico and the US Northeast with a staged version of Zohn-Muldoon’s Comala , in collaboration with PUSH Physical Theater and Alia Musica. An extensive blog about another recent tour, authored by flutist Deidre Huckabay, was published at the NewMusicBox, the online magazine of New Music America. BroadBand is Resident Ensemble every summer at SoundSCAPE Festival in Maccagno, Italy. The group released Cantos , a compilation of Zohn-Muldoon’s vocal works (Bridge, 2011) and Diaries, with large ensemble works by Sanchez-Gutierrez (Urtext, 2012).

Born in Mexico, Sanchez-Gutierrez and Zohn-Muldoon are among the most prominent composers of their generation. Their music is often described as “detailed, kaleidoscopic, lyrical, and not owing allegiance to any passing fashion.

Carlos Sanchez-Gutierrez was born in Mexico City in 1964 and now lives in the New York Tundra, where he teaches composition at the Eastman School of Music. He studied with Jacob Druckman, Martin Bresnick, Steven Mackey and Henri Dutilleux at Yale, Princeton and Tanglewood, respectively. He has received many of the standard awards in the field (e.g. Barlow, Guggenheim, Fulbright, Koussevitzky, Fromm, American Academy of Arts and Letters.) He likes machines with hiccups and spiders with missing legs, looks at Paul Klee’s Notebooks every day, hasn’t grown much since he reached adulthood at age 14, and tries to use the same set of ears to listen to Bach, Radiohead, or Ligeti.

The music of Mexican-born composer Ricardo Zohn-Muldoon is characterized by its detailed sculpting of musical ideas and “kaleidoscopic” contrapuntal design. Mexican literature has provided the point of departure for many of his compositions, such as the miniature opera NiñoPolilla, and the scenic cantata Comala, based on the novel Pedro Páramo, by the noted Mexican writer Juan Rulfo. Zohn-Muldoon’s Comala was selected as a finalist for the Pulitzer Prize in 2011. Other professional honors include the 2011 Lillian Fairchild Award and fellowships from the Guggenheim Foundation. Zohn-Muldoon joined the composition faculty of the Eastman School of Music in 2002.