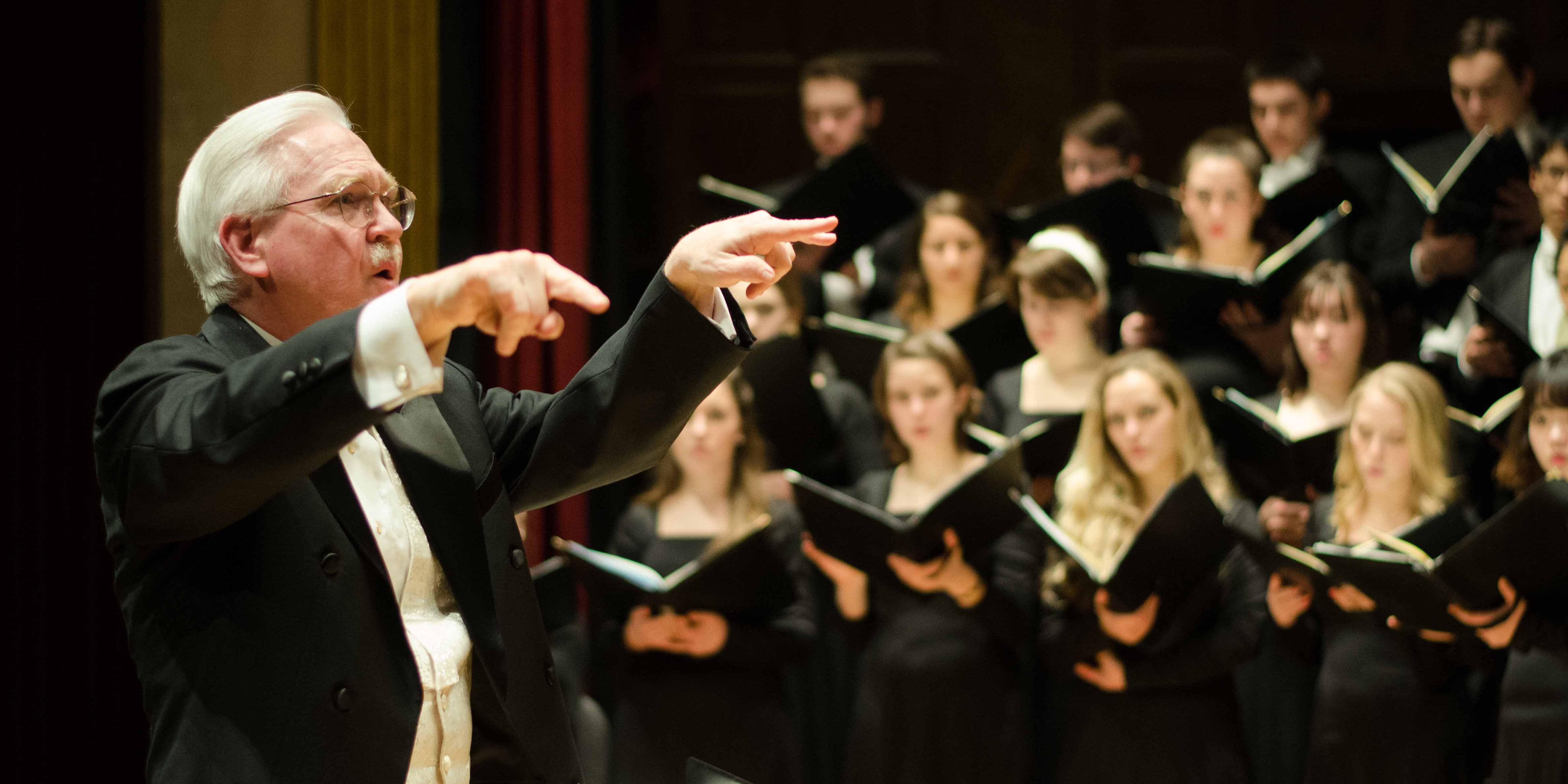 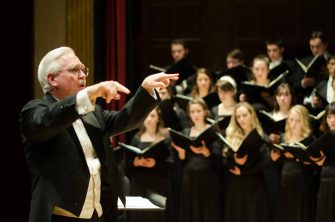 The Eastman Chorale, under Eastman School of Music Director of Choral Activities William Weinert, will travel to Ohio for two performances in November, and local audiences will get a preview of their mini-tour at the ensemble’s concert 8 p.m. Friday, Nov. 11, in Kilbourn Hall.

While in Ohio, the Eastman Chorale will join the Oberlin College Choir, directed by Eastman alumnus Gregory Ristow (MA ’04 MM ’04 DMA ’11), for a special joint event on Thursday, Nov. 17, in the College’s Finney Chapel. The two ensembles will then travel to Cleveland on Friday, Nov. 18, to reprise the concert as part of the “Great Music in a Great Space” series at Mary Queen of Peace Church.

In Rochester, the Eastman Chorale will perform a wide-ranging program of works written by composers from the 18th to 21st centuries: J.S. Bach, Johannes Brahms, Georg Schumann, Randall Thompson, Byron Adams, and Daniel Shapiro. They will also perform Samuel Adler’s “Five Choral Scherzi” with faculty guitarist Nicholas Goluses and Ryan Kelly, principal violist of the Pittsburgh Symphony. The concert will end with “Hear My Prayer,” by Oberlin alumnus Moses Hogan, and “Roll, Jordan, Roll,” by Robert Fountain. Fountain received his bachelor’s and master’s degrees at Eastman in 1941 and 1942, respectively, and served on the faculty and as Dean of the Oberlin College Conservatory, leading the Oberlin Choir on an eight-week tour of the Soviet Union and Romania in 1964.

The Eastman Chorale is a select ensemble of singers performing the finest choral repertoire from the past five centuries. The ensemble has performed by invitation at conferences of the National Collegiate Choral Association, tours annually, and has performed at both American Choral Directors Association and MENC (now known as the National Association for Music Education) conferences. Repertoire in recent years has ranged from music of Bach, Palestrina, and Brahms to works of Dominick Argento, Steven Stucky, Arvo Pärt, and George Rochberg.

Founded in 1929 by Olaf C. Christiansen as the Oberlin A Cappella Choir, the Oberlin College Choir is a select ensemble of college and conservatory students that performs a wide variety of a cappella and accompanied choral literature. In 1964, the ensemble sang 39 concerts in the former Soviet Union and in Romania as part of the Cultural Exchange Program of the U.S. State Department. The ensemble also has performed at Severance Hall with the Cleveland Orchestra.