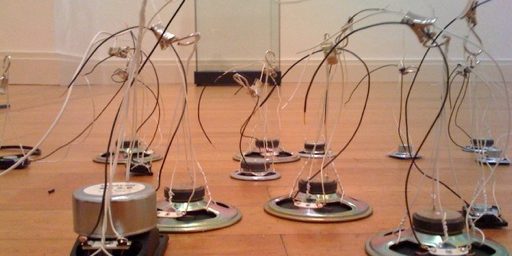 Building on the foundation of the computer music center founded at Eastman School of Music in 1981 by Allan Schindler, the Eastman Audio Research Studio (EARS) is defining a new vision for the teaching and creation of electronic music. Spatial audio, sound research tools, construction of installations, invention of new electric and electronic interfaces and instruments, and a large inventory of equipment and resources will broaden and enrich the study of sound at Eastman. 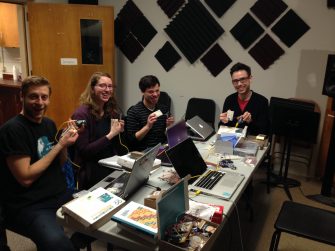 EARS is a platform for research, experimentation, and creation of new works and sound art at the intersection of musical expression and sound technology. In addition to offering courses in electronic music, the center gives students access to resources such as software programs, hardware, analog and digital gear, and other materials for their composing and research projects.

Based in Room 50 of Eastman School’s main building, EARS has equipped a new facility (Room 514), where an expandable 16-channel loudspeaker array will introduce students to working with multiple sound sources. The new space serves as the venue for an hour-long concert at 7:30 p.m. Friday, Sept. 23, titled “Electronic Music 1952-2010 at the Darmstadt Festival” featuring the music of John Cage, György Ligeti, Luigi Nono, Joji Yuasa, Herbert Eimert, Maryanne Amacher, Oliver Schneller, and other 20th- and 21st-century composers.

Schneller joined the Eastman School faculty in 2015 as professor of composition and director of the computer music center, taking over as the center leader upon the retirement of founder Allan Schindler. The recipient of numerous international commissions and prizes for his work, Schneller developed the Computer Music Studio at the City University of New York in the 90s; co-founded the SinusTon Festival for Experimental Music; was composer in research at IRCAM, a French institute for science about music, sound, and electro-acoustical art music; and has presented composition seminars and master classes around the world.

EARS sponsors a variety of interdisciplinary projects and international exchanges and presents guest lectures and a regular concert series in the School’s Hatch Recital Hall. In addition to offering support for individual student projects, the center stages projects which are linked to a performance or venue outside of the Eastman School. Current and previous project partners include the University of Rochester and its Memorial Art Gallery, the Strong National Museum of Play, Spectrum Gallery in New York City, and the SinusTonFestival in Magdeburg, Germany.

One of the projects currently being assembled at EARS is the Eastman Mobile Acousmonium (EMA). This installation consists of an array of individual custom-built loudspeakers co-designed by students from Eastman and the University of Rochester. Each speaker has the capacity to tilt, rotate, or change its direction, altering sound reflection patterns in a given space. The project is scheduled for completion in March 2017, when it will be presented at the Memorial Art Gallery in Rochester.

This year, EARS introduces a new series of two portrait concerts revolving around the work of guest artists. Miller Puckette, a professor at the University of California San Diego who created the music and multimedia synthesis program Max, and pianist Shiau-uen Ding will perform Philippe Manoury’s monumental composition for piano and electronics Pluton. Later this fall, eminent British composer Trevor Wishart will present workshops, lectures, and a concert featuring his works.

EARS events are free and open to the public.

Electronic Music 1952-2010 at the Darmstadt Festival

Lecture by Miller Puckette, associate director of the Center for Research and Computing in the Arts, University of California San Diego

Trevor Wishart Portrait Concert. Works by the eminent British composer, who will be a guest artist at the Eastman School of Music and will be presenting workshops and lectures Nov. 29 to Dec. 1 in the Eastman Audio Research Studio