The University of Rochester’s Eastman School of Music is holding an orchestral conducting masterclass led by conductor and Professor Neil Varon on Friday, Nov. 18, and Saturday, Nov. 19. The two-day session will give six experienced pre-professional young conductors the opportunity to enhance their conducting skills and musicianship. 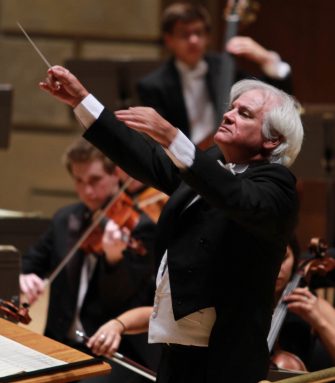 “The masterclass fulfills a need among young conductors who strive every day to better their craft,” said Varon. “They can only do so in front of a seasoned orchestra that is very familiar with the repertoire to be taught.”

Masterclass participants will work with the Eastman Philharmonia playing Ravel’s Rapsodie espagnole and Prokofiev’s Symphony No. 5. The orchestra will have just finished a two-concert performance of those works in Rochester and in New York City.

In addition, the conductors will meet with Varon prior to leading the orchestra to discuss the works in order to improve their individual performances, and will have an assessment session at the end of the masterclass.

Varon was the first Kapellmeister of the Deutsche Oper am Rhein in Dusseldorf and served as the music director of the Südwestfälische Philharmonic and the City of Gelsenkirchen, Germany. As a guest conductor, he has conducted at the New York City Opera, Hamburg State Opera, Stuttgart State Opera, and Berlin Stattsoper, and continues to conduct throughout Europe and Asia. He directed the German premiere of Un Re in Ascolta by Luciano Berio in Düsseldorf, and the world premiere of Erinys by Volker David Kirchner in Wuppertal. He made his Rochester Philharmonic Orchestra debut in 2011 and is one of the orchestra’s regular conductors.

A frequent guest in Asia, Varon led the Tokyo Philharmonic in a series of performances of The Magic Flute for the Mozart Festival in Japan. He conducted the Korean Symphony in Seoul, the Yomiuri Nippon Symphony in Tokyo, and the Kyushu Philharmonic in Fukuoka. In December 2014, Varon led the Daegu Symphony Orchestra and four combined choruses in a performance of Beethoven’s Ninth Symphony for the year-end celebratory concert in Daegu, South Korea.  In February 2015, he conducted four performances of Mozart’s opera The Marriage of Figaro at the Chan Center for the Performing Arts in Vancouver, British Columbia. In June 2016, he conducted the Sinfonieorchester Aachen in Germany in two concert performances of Gershwin’s An American in Paris, James Macmillan’s Veni Veni Emmanuel, and Shostakovich’s Symphony no. 1.

Varon has developed and led successful summer orchestral conducting institutes at the Eastman School of Music and taught masterclasses in Europe and the United States.