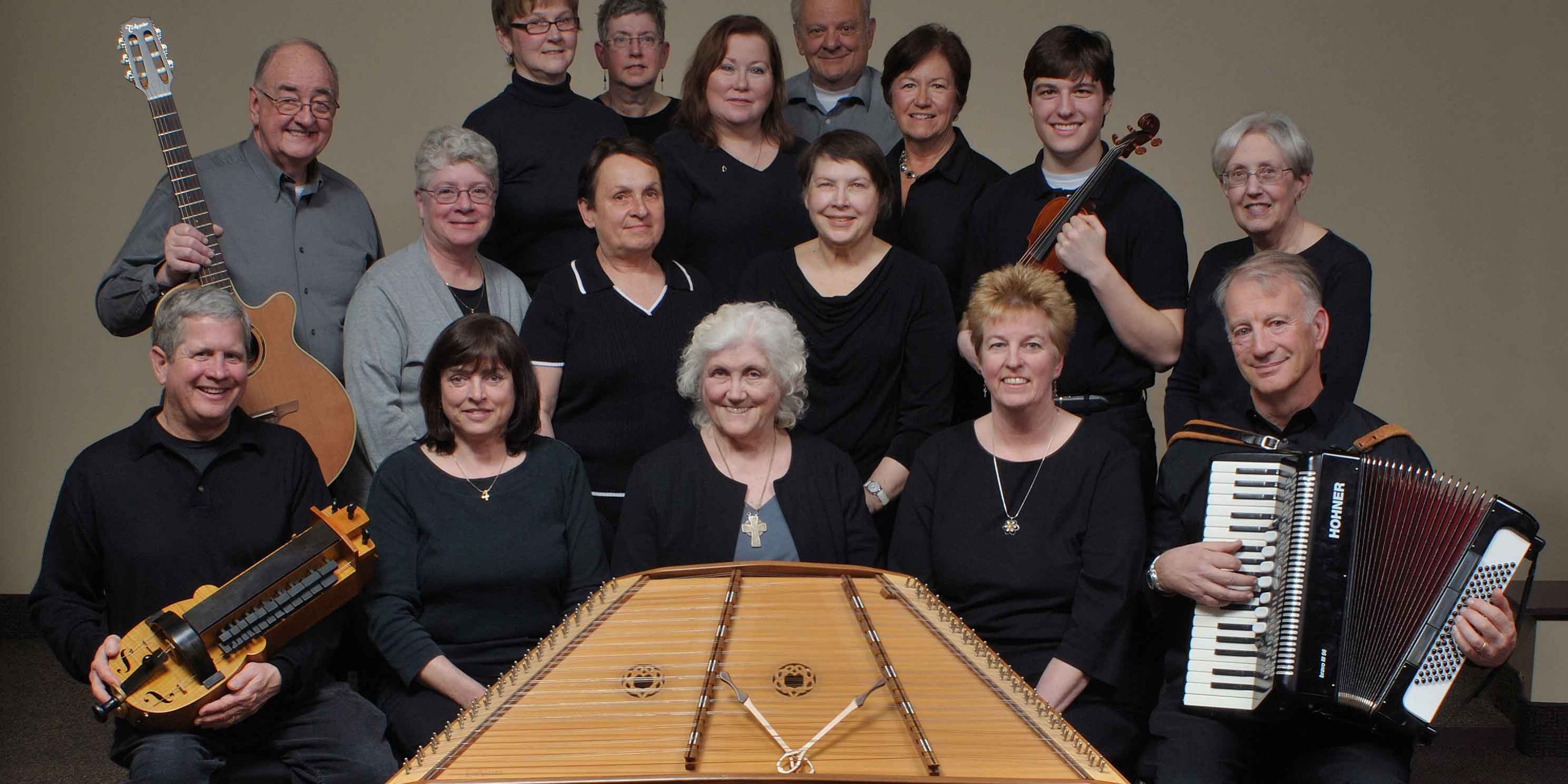 Striking Strings Hammered Dulcimer Ensemble of the Eastman Community Music School, under the direction of Mitzie Collins and Linda Sniedze Taggart, will be featured at the upcoming Old Songs Festival in Altamont, New York,  near Albany.  The festival, celebrating its 36th year, is one of the largest and most prestigious gatherings of traditional folk musicians  in the North East.

Striking Strings will bring 16 musicians to the festival, held June 24, 25, and 26.  Most of the group will be playing hammered dulcimers; they will also add in flute, penny whistle, fiddle, accordion, bodhran, and banjo.  Joining the group as special guests will be dance caller and multi-instrumentalist Jim Kimball of the SUNY Geneseo music faculty, and Dmitri Yevstifeev, a virtuoso fiddler studying at the Colburn School in Los Angeles.

Typically about 3,000 people attend the Old Songs festival during the weekend.  There will be 80 to 100 performers and over 100 workshops, classes, and performances through the days, as well as three concerts, several dances, and countless jams throughout grounds.  Striking Strings will present a noontime concert on Saturday, July 25, and play for dances on both Saturday and Sunday mornings.  On Sunday, members will also lead a hammered dulcimer jam session and assist Mitzie Collins in teaching and playing traditional children’s singing games.  Jim Kimball and Mitzie Collins will also be part of a workshop on New York State songs.   The complete Old Songs schedule can be found at the website oldsongs.org.

Collins comments. “We are one of the very few dulcimer ensembles in the United States connected with a music conservatory.  We regularly perform throughout the greater Rochester region, and members of our group have played at international dulcimer gatherings in Hungary and in England, and at the largest dulcimer festival in the United States, held in Evart, Michigan.”  Associate director Taggart notes, “Our ensemble is known for the wide variety of music we play, ranging from Bavarian hackbrett [the German equivalent of the hammered dulcimer] tunes to melodies from England, Ireland, Latvia, France, and Japan.  A specialty of ours is traditional hammered dulcimer music from Western New York State.”

Collins has a Bachelor of Music Degree in Piano Performance and a Master of Arts in Music Education, with a Diploma in Ethnomusicology, from the Eastman School of Music.  She became interested in folk instruments in the late 1960s and plays mountain dulcimer, hammered dulcimer, banjo, and guitar.  In 1976, with her husband Tom Bohrer, she founded Sampler Records Ltd., which produced more than thirty recordings of traditional folk music as well as popular Christmas and Irish concerts for more than twenty years.

Collins serves on the International Board of Directors of the Cimbalom World Association and has attended five international CWA congresses.  In 2007 she received the Artist of the Year Award given by the Arts and Cultural Council for Greater Rochester and was honored as the “Musician of the Year” by the Mu Phi Epsilon Fraternity Alumni on March 2014.  In addition to directing the Striking Strings Hammered Dulcimer Ensemble, and teaching hammered dulcimer and Western Music History at the Eastman Community Music School, Collins serves as a substitute organist in area churches, and performs in regional and international festivals.

Linda Sniedze Taggart, the first hammered dulcimer player to receive an Honors Diploma from the Eastman Community Music School, was named assistant director of the ensemble in 2013.   She teaches hammered dulcimer classes at the Eastman Community Music School and also travels widely.  Taggart has won accolades for her performances in Washington, D.C., Milwaukee, Long Island and Philadelphia and has given workshops and performances at the Evart, Michigan, Old Time Dulcimer Players’ Fest and at the Upper Potomac Dulcimer Festival in West Virginia.  With members of Striking Strings she performed at the 11th Congress of the Cimbalom World Association in Budapest, Hungary.   Linda Sniedze Taggart is active in the Latvian Community, both locally and nationally, and plays the kokle, a Latvian zither.