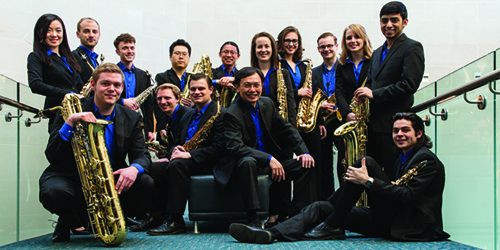 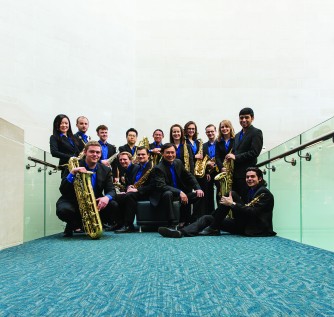 From concert halls to music camps, the Eastman Saxophone Project will bring its innovative programing and versatile performances to a variety of audiences in China this summer. Local audiences can see and hear what makes this Eastman School of Music ensemble unique and renowned when the group presents a free send-off concert at 7:30 p.m. Thursday, July 7, in the school’s Hatch Recital Hall.

Eastman Saxophone Project (ESP) is a conductorless ensemble which presents its programs of specially arranged works entirely from memory. Since its founding in 2010 by Associate Professor of Saxophone Chien-Kwan Lin, ESP has appeared in Steinway Hall in New York City, the Kennedy Center in Washington, D.C., Rochester’s Greentopia Festival, national and regional conferences of the North American Saxophone Alliance (NASA), on public radio, at numerous high schools, and other venues locally and nationally.

With all of its performances archived and available through its YouTube Channel, EastmanSaxProject, the ensemble already enjoys a sizeable following among saxophone audiences in China.  While on tour July 13 through 21, ESP will present its own concerts, join students from the Shandong University of Arts for two performances, and give master classes. Additionally, Lin himself will perform a concerto with the Beijing Wind Symphony and give a saxophone presentation at the Asia Pacific Band Directors Association (APBDA) conference in Beijing.

“I firmly believe that travel is the best form of education, and I am super excited that my students will get to experience it,” said Lin. “This tour presents itself as the most exciting endeavor thus far for the ensemble. The saxophone is one of the fastest growing instruments in popularity in China, so I also felt that it is important for Eastman to establish a presence early in its development.”

The Eastman Saxophone Project performs repertoire from a wide spectrum of musical genres, including original works as well as transcriptions and arrangements by ensemble members. The ensemble is also committed to presenting new works and collaborating with both prominent and up-and-coming composers including DownBeat award winner Jennifer Bellor, ASCAP award winners Ted Goldman and John Mackey, Foundation for Contemporary Arts Award recipient Marc Mellits, and others.

In China, ESP will perform such audience favorites of J.S. Bach’s Chaconne, Robert Russell Bennett’s Suite of Old American Dances, and short pieces by Debussy and Ravel. The ensemble’s July 7 local recital will give audiences a preview of its upcoming tour.

The tour will feature performances at the Shanghai Summer Saxophone Camp on July 13; in the opening ceremony of the APBDA conference at Beijing’s National Center for Performing Arts on July 14 and during the conference on July 17; and at Shandong University of Arts in Jinan, Shandong province, on July 19. The Eastman Saxophone Project will wrap up its tour on July 21 with outreach and exchange events in Ningbo, a city in Zhejiang province near Shanghai.