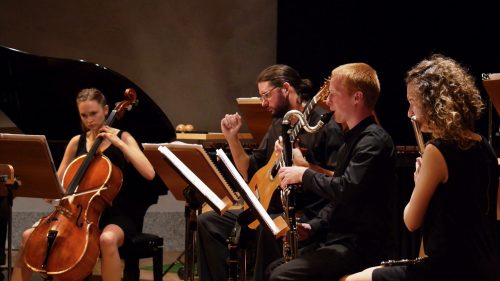 Eastman BroadBand, a chamber music ensemble at the Eastman School of Music, makes a return engagement this summer to soundSCAPE in Maccagno, Italy. From July 1 through 14, the group will serve as the festival’s resident ensemble for the second year in a row.

Founded by Professor of Composition Ricardo Zohn-Muldoon and Chair and Professor and Chair of Composition Carlos Sanchez-Gutierrez, Eastman BroadBand is a flexible group of alumni and current students whose programs explore the many facets of contemporary music making. Its repertoire includes modern classics by Ligeti, Birtwistle, and Carter, as well as recent works by living composers. The ensemble has performed at the Cervantino and Chihuahua international festivals in Mexico; Festival SpazioMusica in Italy; the Sonidos Festival in New York City; and major venues in Atlanta, Pittsburgh, and New York City.

The soundSCAPE festival, which was established in 2005 and is directed by Eastman graduate Nathanael May MM ’01, attracts composers and performers from around the world. As the resident ensemble, Eastman BroadBand will participate in concerts and coaching activities, and will perform with the newly formed soundSCAPE Sinfonietta ensemble.

Eastman BroadBand members who will be at this year’s 2016 soundSCAPE festival are Brant Blackard, percussion; Deidre Huckabay, flute; Hanna Hurwitz, violin; Nicole Joshi, percussion; Sammy Lesnick, clarinet; Ailbhe McDonagh, cello; and Daniel Pesca, piano. The group will be joined by doctoral trumpet student Arda Cabaoglu for its appearance with the soundSCAPE Sinfonietta. In addition, Hurwitz will give a presentation titled “Self-Determination Theory in Practice and Performance: How Quality of Motivation Affects Performance Outcomes” as part of the festival’s lecture series.

During the festival, Eastman BroadBand will premiere works written specifically for the group by some of the participating composers, including Resonances by master’s degree student Reilly Sptitzfaden. They’ll also join the soundSCAPE Sinfonietta to perform the premiere of Between by recent doctoral degree recipient Daniel Pesca.

Among other repertoire which will be performed during the festival are Diaries by Sanchez-Gutierrez and Zohn-Muldoon’s Comala, which earned the composer designation as a Pulitzer Prize in Music finalist in 2011. In addition, musicians from Eastman BroadBand and festival faculty members will perform the premiere of Sandburg Songs by composer and Eastman alumnus Matthew Schreibeis, featuring soprano Tony Arnold. Schreibeis is serving as Composer Fellow for soundSCAPE, teaching private composition lessons.

Sanchez-Gutierrez and Zohn-Muldoon also serve on soundSCAPE’s faculty, along with Eastman alumni Dieter Hennings, guitar, and Thomas Rosencranz, piano. Professor of Composition Oliver Schneller will be one of the featured guest composers at the festival.