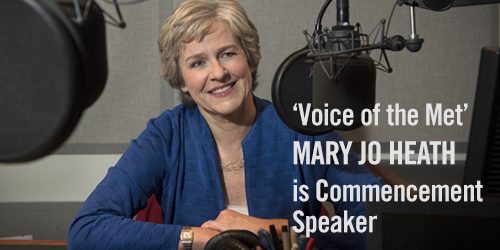 “Voice of the Met” Mary Jo Heath will be the speaker at the Eastman School of Music’s 91st  Commencement Ceremony on Sunday, May 15. Heath, who received her PhD at Eastman, will also be presented with the School’s Distinguished Alumni Award.

The Sunday commencement exercises, which start at 11:15 a.m. in Kodak Hall at Eastman Theatre, are for students receiving their Bachelor of Music, Master of Arts, and Master of Music degrees. The ceremony for students receiving a Doctor of Musical Arts and Doctor of Philosophy degree will be held at 9 a.m. Saturday, May 14, in Kodak Hall. Approximately 250 candidates from the Eastman School of Music will receive their undergraduate and graduate degrees during this year’s ceremonies.

Heath was the Senior Radio Producer at the Metropolitan Opera when she was named full-time radio host in August 2015. Just the fourth person to hold that post since the broadcasts began in 1931, Heath is the voice heard by listeners around the world during the Met’s Saturday matinee and Sirius XM channel broadcasts.

Previously, Heath had worked as a producer and guest radio host for the opera company over nine seasons, producing nearly 1,000 broadcasts and hosting 65 Met broadcasts. She also conducted behind-the-scenes interviews with Met staff and artists for both the radio broadcasts and Live in HD transmissions to movie theaters.

Heath has worked for more than 25 years in various facets of the music industry, from radio stations to record companies to researching and writing. While studying at Eastman, Heath hosted the Saturday afternoon Met broadcasts on WXXI Classical 91.5 FM.

After receiving her PhD in music theory in 1988, Heath worked as a product manager for the Philips Classics record label, overseeing recording and production of new releases. She also worked in marketing and new business development. After the company folded in 1999, Heath directed an online classical music site, was a newspaper music critic, conducted music research for Renée Fleming and Barbara Bonney, and returned to radio work at WQXR in New York City and at WSHU in Fairfield, Conn. She joined the Met as Senior Radio Producer in 2006.

A native of Norman, Oklahoma, Heath earned bachelor’s and master’s degrees in music from the University of Oklahoma.