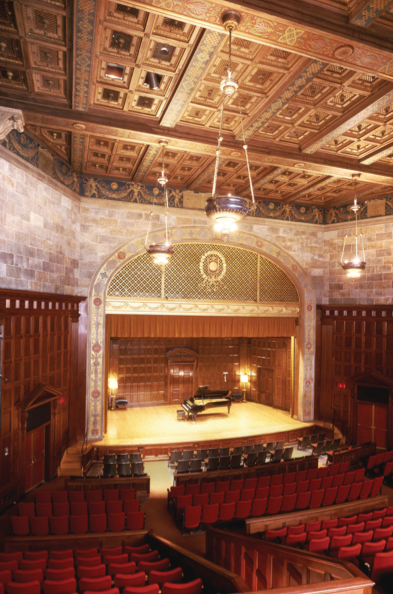 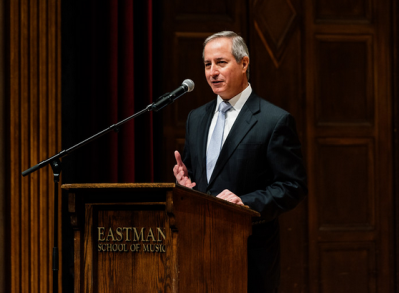 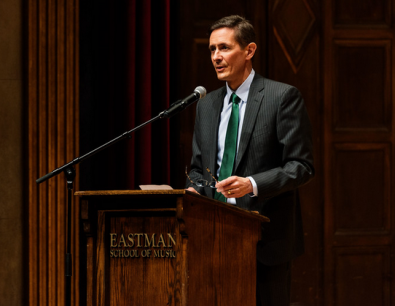 The University of Rochester’s Eastman School of Music today announced two gifts totaling $700,000 that will provide support for substantial renovations to the school’s historic Kilbourn Hall. The Avangrid Foundation has committed $400,000 to the project and the Kenneth and Myra Monfort Charitable Foundation Inc. will contribute $300,000.

“This is a special day for Eastman and the City of Rochester,” said Jamal Rossi (image above top), the Joan and Martin Messinger Dean of the Eastman School of Music. “We are so grateful to Avangrid Foundation and to the Monfort Foundation for providing the critical funding we need to appropriately and carefully upgrade this historic theater.”

The Avangrid Foundation, on behalf of its subsidiary Rochester Gas and Electric, is dedicated to supporting projects and organizations that enhance the quality of life in its local communities. Kilbourn Hall, often referred to as the “community’s living room,” is a fitting recipient for the foundation’s largest-ever gift. In recognition of this gift, the lobby of Kilbourn Hall will be named in honor of Avangrid Foundation.

“We are pleased to support the arts in Rochester and at the Eastman School of Music,” said Robert Kump (image above lower), president of the Avangrid Foundation. “Kilbourn Hall is one of Rochester’s cultural jewels, and this renovation will ensure that the community can enjoy it for years to come.”

In addition to serving as the primary location for Eastman’s faculty, student, and guest artist recitals, the 444-seat hall plays host to the Xerox Rochester International Jazz Festival and the First Niagara Fringe Festival and has welcomed legendary artists such as Itzhak Perlman, Ron Carter, and Dave Brubeck. Considered one of the finest chamber music halls in the world, Kilbourn’s fine acoustics also make it a frequent choice for commercial recording sessions.

Support from the Monfort Charitable Foundation comes from longtime patrons of the Eastman School of Music Myra Monfort and her husband, Eastman alumnus William Runyan ’73E (MA), ’83E (PhD). In recognition of their gift, the stage at Kilbourn Hall will be named in their honor.

The renovation plans will preserve Kilbourn Hall’s unparalleled acoustics while enhancing the audience experience through seating, lighting, and stage upgrades.  A portion of the project budget will be devoted to adding an elevator backstage to make the stage fully ADA accessible. Refurbishments will take place in the summer of 2016 and the hall will reopen for the 2016–2017 academic year.