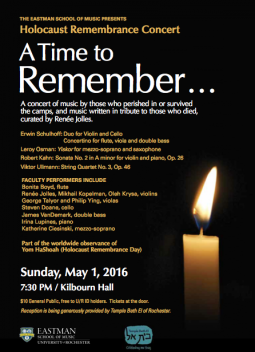 Eastman’s Third Annual Holocaust Remembrance Concert, “A Time to Remember…”, will take place on May 1, 2016 at 7:30 p.m. in Kilbourn Hall.  This year’s concert, performed by distinguished Eastman faculty members, showcases the music of Erwin Schulhoff, Viktor Ullmann, Robert Kahn, and Leroy Osman, composers who perished in or survived the Holocaust, or who have written music in tribute to those who died.

The concert is curated by Renée Jolles, associate professor of violin at Eastman, who says: “Although the concert is dedicated to preserving and showcasing the music of voices silenced by the tragic events of World War II and the Holocaust, we can find in this evening a message of hope, redemption, and the indomitable human spirit.”

Erwin Schulhoff and Victor Ullmann were well-known Jewish-Czech composers who contributed greatly to cultural life in both Czechoslovakia and Germany.  Influenced by many genres of music such as Schoenberg and the Second Viennese School, jazz, folk music, and Dadaism, Schulhoff’s music reflects the rich diversity of art and music in Europe between the wars.  Arrested for trying to flee Prague for the Soviet Union, Schulhoff died in a concentration camp in 1942 in Wülzberg, Bavaria.

Ullmann, who achieved fame as a writer, music critic, and conductor, as well as a composer, was interested in synthesizing the twelve-tone system with traditional tonality in his compositions.  His writings wrestle with the concepts of form, spirituality, and aesthetics.  While interred in the infamous Theresienstadt concentration camp, he wrote some of his most famous works, including the String Quartet No. 3 featured on the May 1 program.  Ullmann, deported to Auschwitz, was murdered in 1944.

Robert Kahn, much admired by Brahms and Joachim, was a Lecturer in Composition at the Königlichen Hochschule für Musik in Berlin and a member of the Prussian Academy of Arts. Persecuted and banned by the Nazis because he was a Jew, Kahn fled to England in 1938, where he was unable to revive his distinguished career.  Although a highly respected musician and teacher in Germany until 1938, he died in obscurity in 1951.  His luscious, romantic music is just beginning to be rediscovered.

Yiskor, written by Leroy Osman for mezzo-soprano Katherine Ciesinski, consists of three movements for mezzo-soprano and saxophone which meditate on stories from the Holocaust.  Nominated for two Grammy Awards and the Pulitzer Prize, the American-born and former University of Houston professor Osman currently lives in Merida, Mexico.

Tickets for “A Time to Remember…” are $10 for the general public and are available at the door. UR ID holders will be admitted free. “A Time to Remember …” will be followed by a reception, generously provided by Temple Beth El of Rochester.

Related events: Hillel is sponsoring a discussion of the concert on Thursday, April 14 at 6 p.m. in the Director’s Dining Room in the Eastman Commons, Eastman Student Living Center, Gibbs Street.  This event is open to the public.

Renée Jolles will be presenting a preview of the program at the Highlands in Pittsford (100 Hahnemann Trail, Pittsford, NY 14534) on Thursday, April 28 at 4 p.m.  This preview is open to residents and any area seniors.