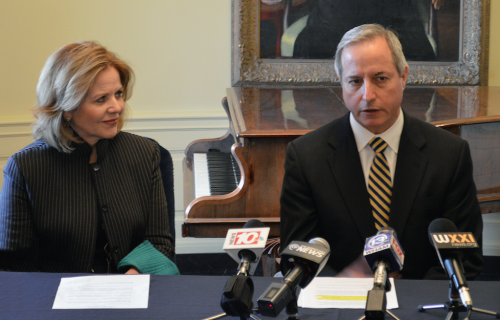 The Eastman School of Music announced the Eastman Philharmonia, conducted by Neil Varon,  will take the stage with Renée Fleming at Lincoln Center’s Alice Tully Hall on November 14, 2016. The performance will include a new composition by Eastman alumnus and Pulitzer Prize-winning composer, Kevin Puts, written specifically for Ms. Fleming and the Eastman Philharmonia. The world premiere of Mr. Puts’ work will be part of the Eastman Presents concert series on November 12 in Kodak Hall at Eastman Theatre.

“As an educational institution, we’re always thinking of ways we can collaborate with our distinguished alumni to enrich our students’ educational experience and impact the community,” said Jamal J. Rossi, Joan and Martin Messinger Dean, Eastman School of Music. “This performance brings together two highly successful alumni for a performance that can only be seen in Rochester, N.Y. and New York City.”

“I’m thrilled to be premiering this new work by Pulitzer Prize-winning composer Kevin Puts,” said Renée Fleming, world-renowned soprano.  The piece is inspired by letters written by the artist Georgia O’Keeffe. “And to be part of the Eastman Philharmonia’s return to New York City for the first time in more than 25 years makes it even more exciting. Coming back to Rochester and the Eastman School of Music as a Visiting Guest Artist has been incredibly rewarding.”

A highlight of the performance is a new commission by Kevin Puts, which is sponsored in part by Mr. Joseph and Mrs. Bette Hirsch of Palo Alto, California. Mrs. Hirsch is a University of Rochester graduate of the class of 1964.

The Eastman School of Music was founded in 1921 by industrialist and philanthropist George Eastman (1854-1932), founder of Eastman Kodak Company. It was the first professional school of the University of Rochester. Mr. Eastman’s dream was that his school would provide a broad education in the liberal arts as well as superb musical training. The current Dean is Jamal J. Rossi, appointed in 2014.

The Eastman School of Music is considered by educators, professionals, and students to be among the finest schools of music in the world. More than 900 students are enrolled in Eastman’s Collegiate Division – roughly 500 undergraduate and 400 graduate students. Students come from almost every state, and approximately 20 percent are from other countries. Each year about 280 new students enroll, selected from more than 2,100 applicants. They are guided by more than 95 full-time faculty members. Seven Pulitzer Prize winners have taught at Eastman, as have several Grammy Award winners. Over 90 percent of the more than 10,000 Eastman School alumni are prominent in various fields of the arts, including opera singer Renée Fleming; jazz musicians Ron Carter, Steve Gadd, and Maria Schneider; composers Dominick Argento, Michael Torke, Charles Strouse, and Jeff Beal; Mark Volpe, Managing Director of the Boston Symphony Orchestra; and first-chair musicians in many major American orchestras.