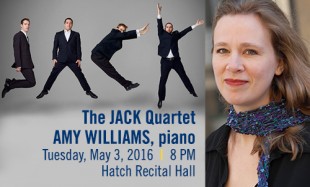 Pianist/composer Amy Williams, along with the JACK Quartet, Linsey Goodman, flute, and Scott Christian, percussion, will be featured in a special performance of “Cineshape” at Eastman School of Music, May 3, 2016 at 8 p.m. in Hatch Recital Hall.

Cineshape began in 2003 when Pittsburgh composer Amy Williams was inspired by the Korean film Chunhyang to write a piece of chamber music. That piece became the first installment of Cineshape, a word she invented to describe musical compositions that draw structural inspiration from films. There are now five Cineshape pieces, each inspired by a different film and written for varying instrumentations from solo piano up to seven players. Williams began working with video artist Aaron Henderson, who took an immediate interest in the Cineshape project. Henderson’s new films draw from sources as diverse as chemical reactions and NASA. Together they have turned these compositions into a multimedia performance with live film processing by Henderson and an all-star lineup of performers, including the JACK Quartet and the composer at the piano.

According to Professor Robert Morris of the Composition Department at the Eastman School of Music, “Amy Williams’ Cineshape project of instrumental music, played with films by diverse major video artists such as Aaron Henderson and others, is at the forefront of video/musical collaborations, made all the more intense and engaging by the JACK string quartet, Linsey Goodman and Scott Christian).”

Deemed “superheroes of the new music world” by the Boston Globe, the JACK Quartet is “the go-to quartet for contemporary music, tying impeccable musicianship to intellectual ferocity and a take-no-prisoners sense of commitment.” (Washington Post) The Toronto Star described JACK as” “a musical vehicle of choice to the next great composers who walk among us.”

The members of the quartet are Ari Streisfeld and Christopher Otto, violins; John Pickford Richards, viola; and Kevin McFarland, cello; JACK’s name consists of the initials of their first names. They met while attending the Eastman School of Music and studied closely with the Arditti Quartet, Kronos Quartet, Muir String Quartet, and members of the Ensemble Intercontemporain under the direction of Pierre Boulez at the Lucerne Festival Academy.

The compositions of Amy Williams have been presented at renowned contemporary music venues in the United States, Australia, Asia, and Europe. Her works have been performed by leading contemporary music soloists and ensembles, including the Pittsburgh Symphony Orchestra, Buffalo Philharmonic Orchestra, JACK Quartet, Ensemble Aleph, Dal Niente, Wet Ink, Talujon, Empyrean Ensemble, Pittsburgh New Music Ensemble, California E.A.R. Unit, Dinosaur Annex, International Contemporary Ensemble, h2 Saxophone Quartet, Bent Frequency, pianists Ursula Oppens, Corey Hamm, and Amy Briggs, and bassist Robert Black. Her pieces appear on the Albany, Parma, VDM (Italy), Blue Griffin, Centaur and New Ariel labels. Ms. Williams was the recipient of a Howard Foundation Fellowship for 2008-2009, a Fromm Music Foundation Commission in 2009, and a Guggenheim Fellowship in 2015-2016. Ms. Williams holds a Ph.D. in composition from the State University of New York at Buffalo, where she also received her Master’s degree in piano performance. She has taught at Bennington College and Northwestern University, and is currently Associate Professor of Composition at the University of Pittsburgh. She is the Artistic Director of the New Music on the Point Festival in Vermont.