“A song for all seas, all ships” 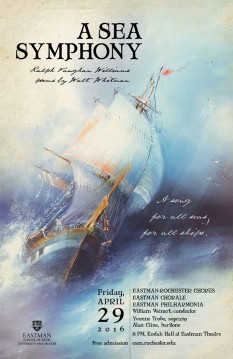 One of the greatest works in the repertoire for chorus and orchestra, Ralph Vaughan Williams’s A Sea Symphony, will be presented by forces from the Eastman School of Music on Friday, April 29 at 8 p.m. in Kodak Hall at Eastman Theatre. The immense work brings together the Eastman-Rochester Chorus, Eastman Chorale, and Eastman Philharmonia, with vocal soloists Yvonne Trobe, soprano, and Alan Cline, baritone, all conducted by William Weinert.

A huge, confident work for large chorus, symphony orchestra, and two soloists (over an hour long), A Sea Symphony created a sensation at its first performance in 1910, conducted by Vaughan Williams, and has been a popular work ever since.

A Sea Symphony is the first of Vaughan Williams’s nine symphonies, though he did not number it. Its four large-scale movements are settings of poems by the 19th-century American poet Walt Whitman, a great inspiration to English intellectuals at the turn of the century, whose verses were frequently set by such British composers as Stanford, Holst, and Delius. For his symphony Vaughan Williams chose four sizeable excerpts from Whitman’s poetry, all dealing with the symbolism, the vastness, and the spiritual power of the sea.

“The Sea Symphony is a special work in many ways,” says Professor William Weinert, Director of Choral Activities for Eastman and director of the Eastman-Rochester Chorus. “It’s one of the few symphonies that features wall-to-wall singing in every movement, and at the same time it uses all the color and brilliance of a full-sized Romantic orchestra.   Most important, it is built around terrific and profound poetry that reaches far beyond the idea of the sea–it deals with the purpose of humankind’s existence here, past, present, and future.  It is a work that broadens the horizon of everyone who hears it or performs it.”

This performance of A Sea Symphony is free and open to the public. For information on all Eastman concerts and events, call (585) 454-2100 or go to EastmanTheatre.org.