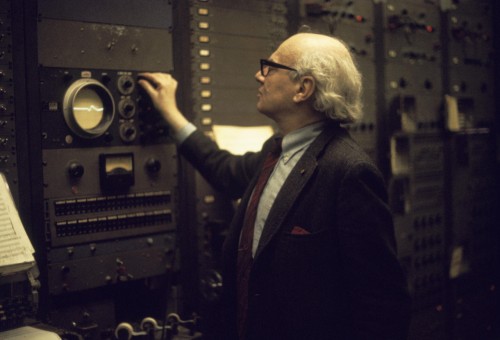 On Friday, April 29, 2016, the Eastman School of Music will host a colloquium and concert honoring the 100th anniversary of the birth of composer Milton Babbitt.  Milton Babbitt (1916–2011) was one of the most extraordinary American composers and musical thinkers of the twentieth century. According to Professor of Theory Zachary Bernstein, “Babbitt was a composer of wit, passion, intelligence, and fierce originality; his music has attracted the attention of numerous performers and listeners interested in contemporary music and influenced at least three generations of composers.”  Babbitt’s centennial provides a welcome opportunity for both celebration of and reflection on this provocative and unique musical figure, and Eastman’s performers and scholars will come together to honor and rejoice in his legacy.

A concert by OSSIA, Eastman’s student-led new music ensemble, at 7 p.m. in Hatch Recital Hall, will present four of Babbitt’s works. These include two deeply moving vocal works, Du and Two Sonnets, and two virtuosic brass pieces, Around the Horn and the rarely performed Fanfare for Double Brass Sextet. The concert will also feature music by three composers influenced by Babbitt:  Andrew Mead,  Robert Morris, and Matthew Barber. Mead is on the faculty of Indiana University; the latter two composers are well-known to the Eastman community, Morris as a long-time member of the composition faculty and Barber as a recent graduate of the DMA program.

Earlier in the day, at 3:30 p.m. in ESM 305, three scholars of Babbitt’s music will discuss aspects of his music and legacy. Andrew Mead, author of An Introduction to the Music of Milton Babbitt, will present on Babbitt’s “Game of Tones,” investigating the sense of play his music embodies.  Joseph N. Straus, of The Graduate Center of the City University of New York, will discuss Babbitt’s analytical work, which has become a basis for contemporary American music theory. Eastman’s Zachary Bernstein will explore the delightful and paradoxical sense of motion Babbitt’s music inspires in its listeners.