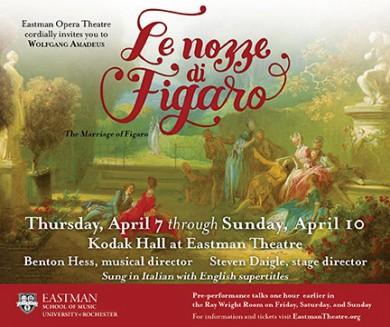 Eastman Opera Theatre is pleased to announce the return of Mozart’s Le Nozze di Figaro (“The Marriage of Figaro”) to Eastman Theatre’s Kodak Hall stage in April. Considered as the first major opera masterpiece and a best-loved comic opera, Le Nozze di Figaro is a fast-paced story that revolves around the timeless themes of love and misunderstanding, with a cast of memorable characters and beautiful melodies that have made the work a popular standard of operatic repertoire.

Mozart’s opera is based on a play of the same name by the French writer Pierre Beaumarchais. Because of its unflattering portrayal of the ruling class, the play was banned for a time in parts of Europe, and the sentiments expressed fanned the flames of revolution in France. Taking place all in one day, Le Nozze di Figaro recounts the obstacles that Figaro and Susanna, servants in the house of Count Almaviva, must overcome on their way to the altar. Meanwhile, the despondent Countess seeks to rekindle her husband’s passion while holding back the advances of a lovesick page. Several ruses lead to misunderstandings and mistaken identities, resulting in confusion and comedy. At the end, though, all is happily resolved, with forgiveness and true love triumphing.

“Mozart’s musical genius in Le Nozze di Figaro has been influential to all forms of opera and musical theatre,” said Steven Daigle, Professor of Opera and Head of Eastman Opera Theatre.  “Mozart fuses comedy and pathos in a music score full of innovative arias, ensembles and finales that were the first of their kind.   The themes are still relevant even 230 years after it was originally written. It was a pivotal work not just for its time, but also for the lyrical theatre in general.”

Daigle is the stage director and Benton Hess, conductor and music director for Eastman’s opera program, is the conductor. This is the second time Daigle will be directing Le Nozze di Figaro, and the fifth time in the last 30 years the university has produced the play. What differs for this production is that it will take on more of a Viennese or French quality as compared to the original, which was set in Seville, Spain.  This year’s take was inspired by Jean-Honoré Fragonard, with the intriguing love story played out in a garden environment with a lighter and wild wilderness approach.

Eastman Opera Theatre’s production of Le Nozze di Figaro will be sung in Italian with projected English supertitles and a full orchestra. The performances will feature two rotating casts of Eastman School of Music undergraduate and graduate students.