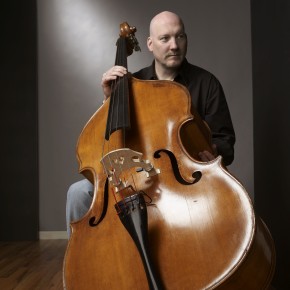 Bassist and composer Scott Colley, who has performed with legendary jazz musicians Herbie Hancock, Michael Brecker, and Andrew Hill, and who was an original member of the Harold Danko Quartet, will join a small ensemble of Eastman School of Music students on Friday, April 1, as part of the Jazz Café Series, which features Eastman jazz students in performance with nationally acclaimed jazz artists. The Jazz Cafés feature a combination of standards and Scott’s music and include two sets – one at 7 p.m. and one at 10 p.m. — in the Atrium at Max’s of Eastman Place.

The Eastman students performing in this concert are Colin Gordon, alto saxophone; Billy Petito, guitar; Sterling Cozza, piano; and Daniel Sunshine, drums. Harold Danko, Professor of Jazz Studies and Contemporary Media and a former bandmate of Scott Colley, will also be featured on the performance. Tickets to each concert are $10 (general admission), available at the door. Drinks and light snacks will be available for purchase.