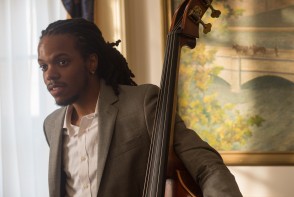 The Office of Academic Affairs at the Eastman School of Music is very proud to announce that bassist Tyrone Allen has been awarded the 2016-17 Links Scholarship. The award, a cooperative effort between the Rochester, New York Chapter of The Links, Incorporated, and the Eastman School of Music, recognizes and celebrates the extraordinary talent and academic achievement of an African-American scholar musician.

According to Assistant Dean of Academic Affairs, John Hain, “Tyrone is a double bass jazz and classical major with an outstanding record of musical and academic achievement, and I’m very happy to award him the scholarship this year.”

During his time at Eastman, Tyrone’s musical and academic growth has been remarkable and he has proven himself a well-respected member of the community. The Links Scholarship award for the 2016-17 academic year is $5,000, along with an opportunity to present a special recital on April 24,  2016 at 3 p.m. in Kilbourn Hall at the Eastman School of Music. The concert is free and open to the public.

Tyrone studies bass at Eastman in both jazz and classical idioms with professors James VanDemark and Jeff Campbell. According to VanDemark, “Tyrone is a ridiculously quick study in so many aspects of playing the instrument and being an expressive musician. It’s no surprise that he is so accomplished both in jazz and classical playing. His positive, open-minded attitude towards everything ensures a wildly bright future for him and the world of music that will hear him.”

The Links, Incorporated is an international, not-for-profit corporation, established in 1946. The membership consists of nearly 14,000 professional women of color in 282 chapters located in 41 states, the District of Columbia and the Commonwealth of the Bahamas. It is one of the nation’s oldest and largest volunteer service organizations of extraordinary women who are committed to enriching, sustaining and ensuring the culture and economic survival of African Americans and other persons of African ancestry. The goal of The Arts facet is to increase and expand art activity, and elevate our programs through arts integration and effectively create an arts renaissance within our organization and programmatic efforts.

Throughout the nation today, Links Chapters partner with museums, symphonies, arts councils, educational institutes and corporations in order to support art programs, especially where there is a focus on artists of color. Links are creating and supporting opportunities for educating minority youth in the arts and presenting and supporting performances by youth and accomplished professional artists in a diversity of disciplines.