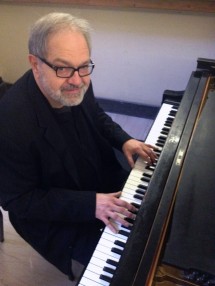 Jazz pianist, composer, and professor of jazz studies and contemporary media at the Eastman School of Music, Harold Danko will be presenting a concert featuring original compositions at his unique “Quadrennial Event” on February 29 at 8 p.m. as part of the Eastman Faculty Artist Series in Kilbourn Hall. The “Quadrennial Event” tradition was inaugurated in 1980 at the Jazz Gallery in New York City, and continued at legendary New York jazz clubs such as Birdland and the Five Spot before nesting at the Little Theatre Café in Rochester in 2000 and 2004, and more recently at Venu-Resto Lounge in 2008 and in solo piano format at Eastman’s Kilbourn Hall in 2012.

Danko has persisted in celebrating February 29s for his special performances over the last 36 years. The idea is to serve up an evening of his own compositions, particularly after some reflection during the intervening four years. He has described these events as instantly nostalgic (at least for himself) and boasts that his quadrennial concerts remain “the slowest-growing cult event of modern times”.

Professor Danko is well recognized from long-term associations with impressive jazz legends, including Chet Baker, Gerry Mulligan, Thad Jones/Mel Lewis, Lee Konitz, and Woody Herman, and in performances at major jazz venues throughout the world, as well as on recordings, television, and video.   During the last two decades he has become increasingly known as a band leader, composer, and solo pianist, and is well documented in those capacities on more than thirty CDs on the SteepleChase and SunnySide labels.

“I like to think of myself as a composing improviser (or improvising composer, depending on my mood) and am honored to present my tenth leap year event as part of the Eastman Faculty Artist Series in Kilbourn Hall, performing works from nearly five decades with close friends.” Featured artists who will be performing with Danko include: Rich Perry, tenor saxophone; Clay Jenkins, trumpet; Charles Pillow, woodwinds; Jeff Campbell, bass; and Rich Thompson, drums.

Special guest, saxophonist Rich Perry, has lived and worked in New York City since 1976. He is currently a member of the Maria Schneider Orchestra and The Vanguard Jazz Orchestra. He has recorded extensively for SteepleChase Records, including 21 CDs as a leader, 10 with Harold Danko, and other CDs with Ron McClure, Lee Konitz, Paul Bley, Dave Stryker, Gary Versace, and Dave Scott. He has also recorded on other labels with Fred Hersch, George Mraz, the Vanguard Jazz Orchestra, Maria Schneider, Renee Rosnes, Pete Malinverni, Clay Jenkins, Thad Jones/Mel Lewis, the Joe Henderson Big Band, and the John Fedchock New York Big Band. He is on the faculty of William Paterson University, Manhattan School Of Music, and New York University.

The program will feature duet selections in the first half featuring Danko on piano with Rich Perry on sax, while the second half will include sextet selections with the rest of the ensemble. All compositions are by Harold Danko and published by Aaychdee Music ASCAP. Tickets are $10 general admission and are free to University of Rochester ID holders and current series subscribers.