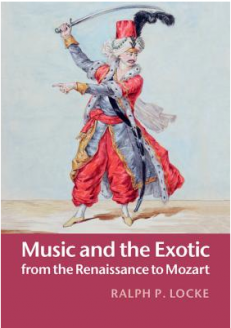 Professor Emeritus of Musicology at the Eastman School of Music Ralph P. Locke was recently awarded an honorable mention by the PROSE Awards, from the Association of American Publishers—in the category of Music & the Performing Arts—for his book, Music and the Exotic from the Renaissance to Mozart

Locke’s Music and the Exotic from the Renaissance to Mozart has been praised by reviewers as “magisterial,” as “immensely learned and amazingly wide-ranging,” and as “offer[ing] a gold standard for the scholarly interpretation of cross-cultural representation through music.” The book is available both in hardcover and as an e-book.

Ralph Locke explains: “Music and the Exotic from the Renaissance to Mozart is a prequel to my 2009 book entitled Musical Exoticism: Images and Reflections (which is now available in paperback from Cambridge). Taken together, the two books survey the ways that Western composers have evoked non-Western lands and peoples, and some minority populations living in the West (e.g., Jews and ‘Gypsies,’ i.e., the Roma).

“In the first book I dealt mainly with works from 1800 onward, including Rimsky-Korsakov’s Sheherazade and Puccini’s Madama Butterfly. The new book, Music and the Exotic from the Renaissance to Mozart, explores exotic characters in early opera, such as the Egyptian queen Cleopatra in Handel’s Giulio Cesare. It considers the portrayal of the biblical Middle East in sacred works of Monteverdi, Bach, and Handel. It looks at a popular English song of the mid 1700s about three visiting Native American chieftains. And it considers the changing associations carried by foreign dances—such as the moresca, chaconne, and sarabande—that were widely employed across Europe.”

Ralph P. Locke is Professor Emeritus and former Chair of Musicology at the University of Rochester’s Eastman School of Music. In 1997 his article on Orientalism in the opera Aida won the H. Colin Slim Award from the American Musicological Society. Locke is also the author of Music, Musicians, and the Saint-Simonians (1986), and he co-edited Cultivating Music in America: Women Patrons since 1860 (1997). He founded and still edits Eastman Studies in Music, a book series published by the University of Rochester Press.

Since 1976, the PROSE Awards—the name is an acronym for “Professional and Scholarly Excellence”—have been organized by the Professional and Scholarly Publishing Division of the Association of American Publishers to recognize the best works in professional and scholarly publishing. According to the Association, “competition was fierce this year, as the number of PROSE Awards submissions broke records with 551 entries.  Winners for the prestigious awards were chosen by an independent, 17-person panel of peer editors, publishers and librarians.”