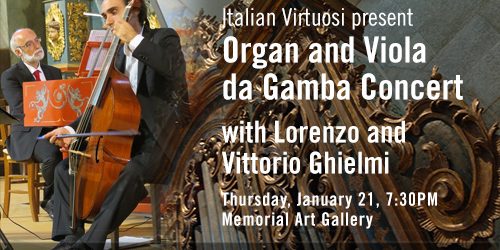 On Thursday, January 21, 2016 the ‘Third Thursday with Eastman’s Italian Baroque Organ at the Memorial Art Gallery’s concert series will present a lecture and concert program featuring Nancy Norwood, Curator of European Art at the MAG, and renowned musicians Vittorio Ghielmi, viola da gamba and Lorenzo Ghielmi, organ and harpsichord. The lecture, which will take place at 6:30 pm, prior to the concert, will explore themes of virtuosity in European Baroque art, in conjunction with the program of virtuosic Baroque music for viol and keyboard presented in the concert that follows. The concert, which begins at 7:30 pm will feature works by Frescobaldi, Pasquini, Abel, Marais, Forqueray, and J. S. Bach.  The program is sponsored by the Humanities Project, a program of the University of Rochester Humanities Center. This concert is also made possible by the support of the Rippey Endowed Trust.

This special program will explore the music of virtuoso composer-performers in Baroque Europe. The concert begins with the music of Girolamo Frescobaldi, organist of St. Peter’s in Rome in the early 17th century, whom thousands flocked to hear play.  It concludes with the final virtuosic flourishing of the viola da gamba repertoire in the hands of 18th-century French gamba players Marin Marais and Antoine Forqueray.  The program also includes pieces for solo viola da gamba by Karl Friederich Abel, preserved in a manuscript held in the New York Public Library.

Lorenzo Ghielmi is a renowned performer, educator and author and has devoted many years to the study and performance of Renaissance and Baroque music. He plays in concerts throughout Europe, in Japan and in the United States, and has made many recordings for radio and disc as well as writing numerous publications and papers. He is the organist of the Basilica di San Simpliciano in Milan and professor of organ at the Civica Scuola di Musica Claudio Abbado, Milan.

Vittorio Ghielmi is a viola da gamba soloist and conductor and has appeared with orchestras such as the Los Angeles Philharmonic Orchestra, the London Philharmonia, the Vienna Philharmonic, Il Giardino Armonico, the Freiburg Baroque Orchestra etc. He also performs in a duo with his brother Lorenzo Ghielmi that has played in the most important European venues. He has been the soloist in the world premières of many new compositions.  He is also professor at the Conservatorio Luca Marenzio (Brescia), and has given several master-classes at academies and universities (Mozarteum University Salzburg etc.).

Both events are free with gallery admission (half-price on Thursday evenings, and free to U of R students with ID). Seating is unreserved, and available on a first-come, first-served basis.

On Friday, January 22, from 3-5 p.m. there will be an organ master class with Lorenzo Ghielmi and Eastman organists at Christ Church, 141 East Avenue, Rochester

Internationally acclaimed organist Lorenzo Ghielmi will work with Eastman organ students on North German Baroque repertoire, including works by J. S. Bach and Nicolaus Bruhns. Christ Church is home to the Craighead Saunders organ, a scientific reconstruction of the organ from 1776 built by Adam Gottlob Casparini in the Holy Ghost Church, Vilnius, Lithuania.

Free and open to the public.

These events are a continuation of the 10th anniversary celebrations of Eastman’s Italian Baroque Organ at the Memorial Art Gallery.