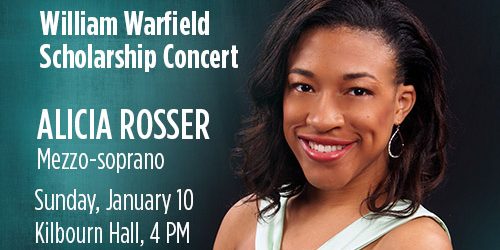 “William Warfield: A Legacy in Music,” the annual concert supporting the William Warfield Scholarship Fund and spotlighting its talented recipients, will feature mezzo-soprano Alicia Rosser, a junior at the Eastman School of Music, at 4 p.m. Sunday, Jan. 10, 2016, in the School’s Kilbourn Hall.

Since it was founded in 1977, the William Warfield Scholarship Fund has provided financial aid to more than 35 voice students at Eastman. They have included soprano Julia Bullock, winner of the 2014 Walter W. Naumburg Foundation’s International Vocal Competition; soprano Nicole Cabell, who in 2005 won the BBC Cardiff Singer of the World competition; and bass-baritone Jamal Moore, who was featured with the University of Rochester a cappella ensemble The Yellowjackets on the NBC competition The Sing-Off in 2011.

In addition to Rosser, also performing are vocalist and pianist Thomas Warfield, founder of PeaceArt International and director of dance at Rochester Institute of Technology/National Technical Institute for the Deaf; the Mt. Vernon Missionary Baptist Male Chorus, Thomas Green, director; and Strings for Success, a violin-instruction program sponsored by The Center for Youth in partnership with Dr. Charles T. Lunsford School No. 19, Gretchen Judge and Patty Yarmel, directors.

Tickets to the concert are $15 for the general public ($10 with student ID), and are available at the door. They are also sold in advance at the Eastman Theatre Box Office, 433 East Main St., by phone (585-454-2100), or online at https://www.esm.rochester.edu/concerts/tickets/.

Rosser, 20, is currently a student of Grammy Award-winning artist and Professor of Voice Anthony Dean Griffey. She began her singing career in elementary school choirs in her hometown of Cheltenham, Md. She started voice lessons while attending Suitland High School, a public performing arts high school, where she graduated tenth in her class and served as secretary of the National Honor Society. At Eastman, she previously studied with now-retired Professor of Voice Robert McIver.

While in high school, Rosser participated in summer programs at the Boston University Tanglewood Institute, the Washington National Opera Institute, and little Patuxent Opera Institute. She also participated in several vocal competitions, earning first place in the advanced freshman/sophomore women category of the 2011 Mid-Atlantic National Association of Teachers of Singing (NATS) and in the advanced junior/senior women category of the 2012 Maryland/District of Columbia NATS competitions.

At Eastman, Rosser has appeared on the Dean’s List for the past two years. Rosser received a Jury Award in her freshman year, was a soloist in an Eastman Repertory Singers concert, and has worked as a summer resident assistant and a head usher with Eastman’s concert office.