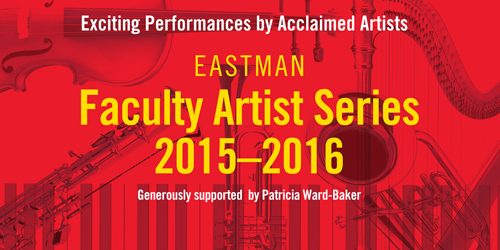 The Eastman School of Music’s Faculty Artist Series continues through spring 2016, showcasing the school’s internationally lauded soloists and chamber musicians. Supported by Patricia Ward-Baker, the recitals give local audiences the chance to catch performances by the faculty artists, whose busy schedules include frequent appearances elsewhere in the world.

Performances range from tuba to voice to showcasing the works of an Eastman faculty composer and are held in the School’s acoustically superb Hatch Recital and Kilbourn Halls. The varied days and times make it possible to find performances that fit in everyone’s schedule.