Eastman School of Music Students Get Their Hands on Legendary Instrument 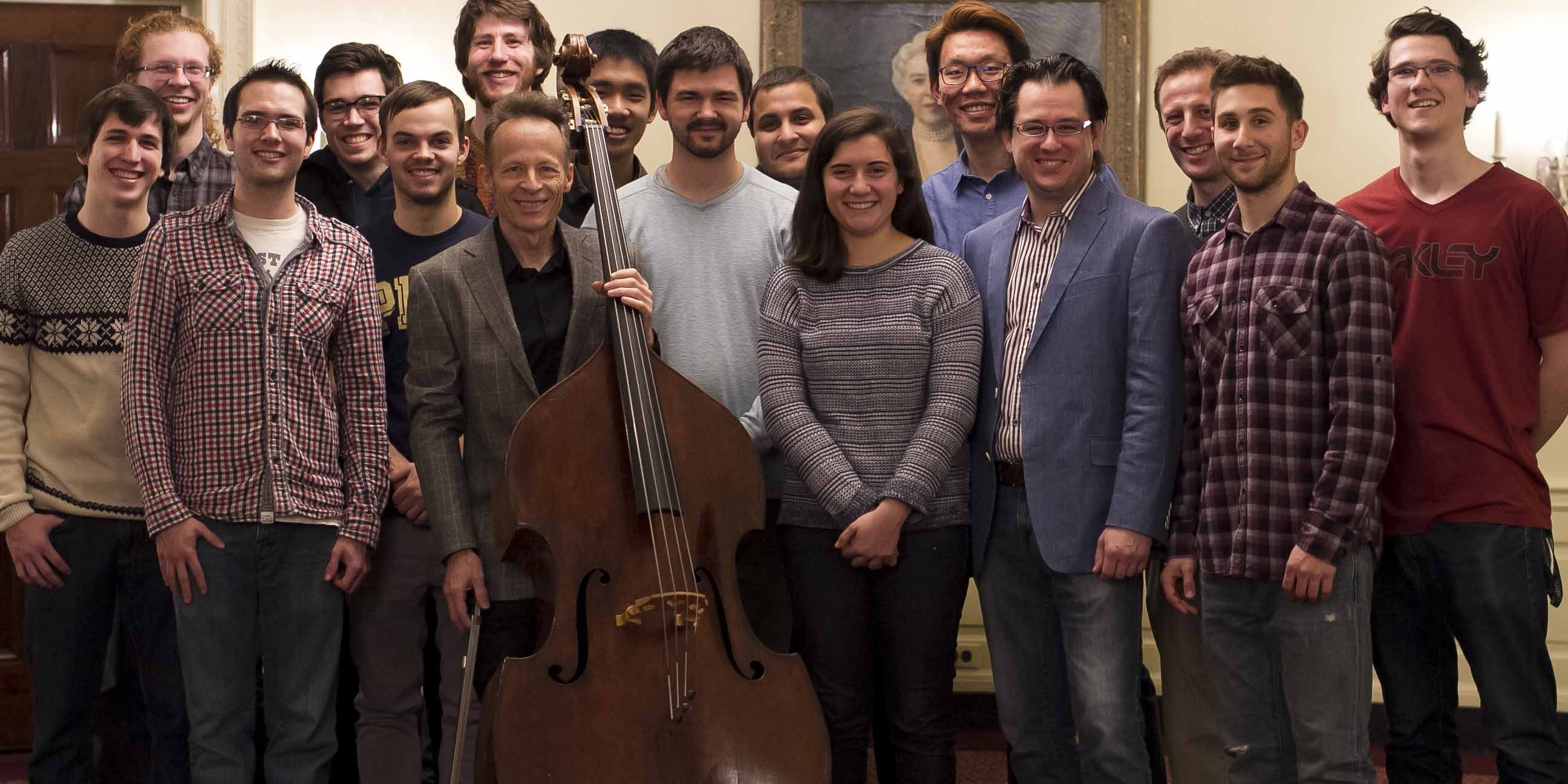 The “most famous double bass in the world” is temporarily in residence at the Eastman School of Music, giving students the chance for first-hand experience on an instrument of extraordinary history.

Thanks to the International Society of Bassists (ISB), Professor James VanDemark and his students have been enjoying exclusive use of the 200-year-old Karr-Koussevitzky Bass. The instrument was once owned by famed conductor, composer, and long-time Boston Symphony music director Serge Koussevitzky. The maestro, who discovered such talents as tenor Mario Lanza and conductor Leonard Bernstein, began his musical career in pre-Revolutionary Russia as a bass virtuoso. He not only played all his performances on this instrument, but composed works specifically with it in mind.

In 1962, eleven years after Koussevitzky’s death, his widow gave the bass to Gary Karr, claiming that her husband’s ghost appeared with the young musician during a recital. Karr, who became a world-renowned soloist over his four-decade career, donated the instrument to the ISB when he retired in 2004.

Since then, the Karr-Koussevitzky Bass has been in “residencies” with string dealers, brought to biennial ISB conventions—including the 2013 convention at Eastman—and occasionally used for performances of the Koussevitzky Concerto for Double Bass. The instrument returned to Rochester in November when Atlanta Symphony double bassist Colin Corner performed the concerto with the Rochester Philharmonic Orchestra. Others who have performed on the instrument include Kitchener-Waterloo Symphony Principal Bass Ian Whitman and Dennis Trembly, Co-Principal Bass of the Los Angeles Philharmonic, who played several recitals on it including a duet with violinist Midori.

Eastman School of Music is the first music school to serve as a temporary home for the Karr-Koussevitzky Bass, with VanDemark himself providing a personal connection from the instrument’s past to current history.

Forty-five years ago, while playing Principal Bass with the Hamilton Philharmonic in Canada, VanDemark commuted to Halifax to study with Karr. There, he played all his lessons for Karr on the storied instrument.

“Both of us found the instrument challenging to play,” recalled VanDemark. “The upper register produces a beautiful sound. Though it is somewhat tight, you can hear the voice of Koussevitzky coming through the instrument. And to look at the elegance of this bass, to play and hear its extraordinary sound knowing its history – the experience is inspiring.”

Made of spruce and maple, with a gamba-shaped body length of just under 105 centimeters, the Karr-Koussevitzky bass is a relatively small bass. In 2004, the instrument was examined by a panel of international experts as well as a dendrochronologist (expert in dating by tree rings) and, despite long-time lore of being 400 years old and of Italian origin, was determined to probably be of French origin from around 1800.

Students have the opportunity to play the storied instrument at the end of their lessons. “It provides them a real touch with the past and, as part of the lesson, we take a closer look at Koussevitzky’s compositions,” VanDemark noted. “It’s extraordinary for them to play on the very instrument for which the pieces they’re studying were written.” VanDemark also brings the Karr-Koussevitzky bass to his studio classes, where they can hear its sound in a bigger room.

“At first, I was almost intimidated to play it,” said sophomore Caroline Samuels. “Just to be standing in front of it is amazing. This bass has been passed from Koussevitzky to Gary Karr to the ISB. It is an amazing feeling to be playing the same instrument that so many greats have also played. We are so lucky to have this opportunity.”