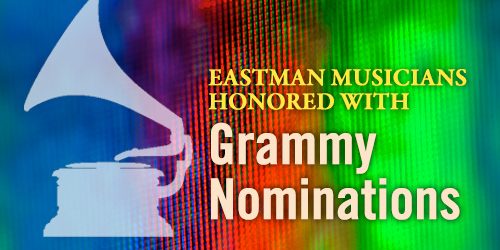 O’Dette and Stephen Stubbes, who serve as co-artistic directors of the Boston Early Music Festival (BEMF), are the conductors on the album Steffani: Niobe, Regina Di Tebe, which was nominated for Best Opera Recording. Earlier this year, the recording won the Echo Klassik and Diapason d’Or de l’année awards.

Laube is a performer on the album Paulus: Three Places of Enlightenment; Veil of Tears and Grand Concerto for Organ & Orchestra. The recording was nominated in the category of Best Classical Compendium.

Ludwig is the mastering engineer on Sound & Color by Alabama Shakes, which is up for Album of the Year. The recording also got a Grammy nod for Best Engineered Album, Non-Classical. Ludwig received his bachelor’s in music education in 1966 and was awarded a master’s degree in trumpet in 2001.

Schneider’s album The Thompson Fields is up for Best Large Jazz Ensemble Album. Schneider, who earned her master’s degree at Eastman in 1985, was also nominated for Best Arrangement, Instruments and Vocals, for her arrangement of David Bowie’s “Sue (Or in a Season of Crime)”, a track from the album Nothing Has Changed.

Fedchock is up for a Grammy for Best Arrangement, Instrumental or A Cappella, for “You and the Night and the Music,” a track from the album Like It Is. He received his master’s degree at Eastman in 1985.

Winners of the National Academy of Recording Arts & Sciences, Inc.’s 58th Grammy Awards will be announced on Monday, Feb. 15, 2016, in the Staples Center in Los Angeles.