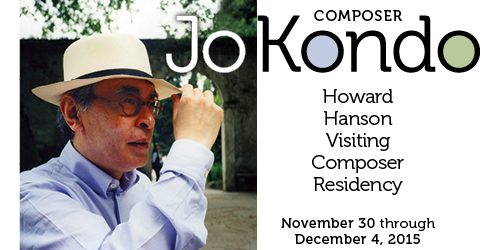 Jo Kondo, one of Japan’s most distinguished composers and an honorary member of the American Academy of Arts and Letters, will be in-residence at the Eastman School of Music from Monday, Nov. 30, through Friday, Dec. 4, as Howard Hanson Visiting Professor.

During his stay, Kondo will attend rehearsals and a concert by the student-run new music ensemble OSSIA, which will premiere his Variations (triskelion), which Kondo composed especially for this group. He will also lead a symposium and master class and attend a preview screening of a documentary on his composing process.  All the events are free and open to the public.

A preview of the documentary A Shape of Time, The Composer Jo Kondo, by German filmmakers Viola Rusche and Hauke Harder, will be screened at 8 p.m. Tuesday, Dec. 1, in Hatch Recital Hall. The film, which runs 1 hour and 40 minutes, follows Kondo in his daily routines, witnessing his slow composing process and accompanying him as he teaches and attends rehearsals and concerts.  The documentary was shot in various locations in Amsterdam, Cologne, and Tokyo.

Other events include a master class from 1 to 4 p.m. on Tuesday, December 1, in the Ciminelli Lounge, and a composition symposium where Kondo will talk about his works from 3:35 to 5 p.m. Thursday, Dec., 3, in Room 209 of the Eastman School of Music. In addition, Kondo’s works Gardenia, High Window, and An Insular Style will be performed during a roundtable and recital at 7 p.m. Thursday, Dec. 3, in Hatch Recital Hall with Kondo, members of OSSIA, composition faculty and John Liberatore, an assistant professor at the University of Notre Dame who received his graduate degrees at Eastman.

Kondo has written more than 130 compositions, ranging from solo pieces to orchestral and electronic works. His music, which has been described as a synthesis of Japanese aesthetic sensibility and western harmonic structure, has been widely performed in Japan, North America, and Europe and recorded on Hat Art, ALM, Fontec, Deutsche Grammophon and other labels. He has received commissions from numerous organizations and his music has been featured at many international music festivals, including the Huddersfield and Tanglewood Contemporary Music Festivals.

As the author of five books on his aesthetic and composition ideas, Kondo has written extensively on musical matters. He is also an associate editor of Contemporary Music Review.

Kondo is Professor Emeritus of Music at Ochanomizu University in Tokyo and still teaches at Tokyo University of Arts part-time. He has been a guest lecturer at the University of Victoria in British Columbia, a British Council Senior Fellow, and composer-in-residence at the Hartt School of Music.

OSSIA was founded in 1997 at the Eastman School of Music by students who went on to create, after they graduated, the much-lauded new music ensemble Alarm Will Sound. OSSIA plans, curates, and presents concerts and events throughout the academic year. Many members go on to have noteworthy performing careers, including members of the JACK Quartet, the Mivos Quartet, and Ensemble Signal. OSSIA New Music is supported by the Howard Hanson Fund.

A Shape of Time, The Composer Jo Kondo. Preview of documentary by German filmmakers Viola Rusche and Hauke Harder on the Japanese composer.

OSSIA Open Rehearsal. The student-run new music ensemble at the Eastman School of Music rehearses for their upcoming concert featuring premieres of works written for them by composers Jo Kondo and Carlos Sanchez-Gutierrez.

Recital and Round Table Discussion on Japanese Composer Jo Kondo.  Discussion by Kondo, composition faculty members from the Eastman School of Music, the new music ensemble OSSIA, and John Liberatore, assistant professor at the University of Notre Dame.  Performance of three of Kondo’s works.