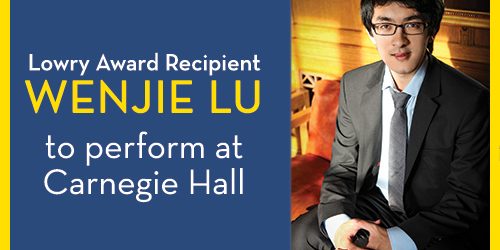 Pianist and Eastman School of Music student Wenjie Lu will perform in Weill Recital Hall at Carnegie Hall on Wednesday, Oct. 21, as part of the “Eastman Presents” series sponsored by the George D. and Frieda B. Abraham Foundation.

Born in Qingdao, China, Lu began playing the piano at the age of five. At age 10 he was admitted into the elementary school attached to the Central Conservatory of Music in Beijing, one of the most prestigious and competitive music schools in China. Lu made his concerto debut at 15.  As a frequent competition winner, he has performed in a number of cities in Asia, North America, and Europe.

In 2009, Wenjie received the Global Ambassador scholarship to study at Capital University in Columbus, Ohio. His many honors include the Keller Award for Outstanding Freshman, the Karen Jeanne Forster Keyboard Award, and the Presser Foundation Award for Outstanding Junior.  He was the state winner of MTNA Young Artist Piano Competition in 2011 and won the first prize at the OMTA/ Graves Young Artist Piano Competition in 2013.

Lu, who received his Master of Music degree at Eastman, is currently a candidate for Doctoral of Musical Arts degree in the studio of Barry Snyder.