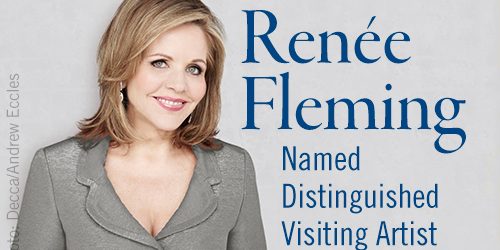 ROCHESTER, N.Y.—Renée Fleming, the world’s most sought-after and beloved soprano, has been appointed Distinguished Visiting Artist at the Eastman School of Music at the University of Rochester.

“I am thrilled that Renée Fleming will be joining the University of Rochester’s fabulous Eastman School of Music as a Distinguished Visiting Artist,” said Joel Seligman, President and CEO of the University of Rochester. “She is the consummate professional, who combines charisma and charm with technical skill, quite literally the most inspiring opera soprano of her generation. Our students will be the beneficiaries of her great talent.”

Fleming is celebrated by media and audiences alike for her sumptuous voice, consummate artistry, and compelling stage presence. While maintaining a busy performance schedule which has brought her countless awards and accolades, Fleming generously gives of her time to opera students and has conducted master classes at many leading music schools around the country. She has taught in Marilyn Horne’s Art of Song program at Carnegie Hall, and her teaching was spotlighted in the documentary Renée Fleming: A YoungArts MasterClass.

“As the child of two vocal music teachers, I have been steeped in music education my entire life. One of the great traditions of classical singing is that knowledge is always passed from working artists to the next generation of vocalists, through direct engagement of the kind that I will have as a Visiting Artist at the Eastman School of Music,” said Fleming. “I’m excited to be able to share what I’ve learned in my studies, my performances, and my travels with vocal students at this school I love so much.”

Fleming received her Master of Music degree at Eastman. In 2011, she performed with the school’s Eastman Philharmonia under conductor Neil Varon in a benefit concert for the Renée Fleming Endowed Scholarship Fund. As Distinguished Visiting Artist, Fleming will offer master classes, coaching sessions, lessons, and open talks and presentations for the students on a recurring basis beginning this academic year. Fleming’s residency is made possible in part through the support of Dr. George N. Abraham.

“Renée Fleming has touched the lives of millions of listeners through her musical artistry,” said Jamal Rossi, the Joan and Martin Messinger Dean of the Eastman School of Music. “As a Distinguished Visiting Artist at Eastman, she will help to transform the lives of students who aspire to achieve musical excellence, and who are passionate about shaping the future of music. We are thrilled and honored that Renée will be a member of the Eastman community once again. I also want to express my personal gratitude to all who have played a role in creating this fantastic opportunity for our students.”

Known as “the people’s diva” and the first opera star to sing the National Anthem at the Super Bowl, Fleming has performed for Queen Elizabeth, President Barack Obama, and the United States Supreme Court. She has sung for numerous historic occasions, including the 2006 Nobel Peace Prize ceremony and the 2014 concert at the Brandenburg Gate commemorating the 25th anniversary of the fall of the Berlin Wall. In 2008, she became the first woman to solo headline an opening night gala at the Metropolitan Opera.

A passionate champion of creativity in the arts, Fleming is a four-time Grammy Award winner. In recent years, she has recorded everything from Berg’s “Lyric Suite” to the jazz album Haunted Heart and the movie soundtrack of The Lord of the Rings: The Return of the King. Her album Dark Hope featured covers of songs by such artists as Leonard Cohen, Peter Gabriel, Arcade Fire, and Death Cab for Cutie, and she released her first-ever holiday album, Christmas in New York, in 2014. Fleming’s recording honors also include the 2009 Echo Award for Strauss’s Four Last Songs and the Académie du Disque Lyric’s Prix Maria Callas Orphée d’Or for Capriccio.

Fleming has been awarded the National Medal of Arts, American’s highest honor for an individual artist; the Fulbright Lifetime Achievement Award; the Polar Music Prize, Sweden’s foremost musical honor; the Chevalier de la Légion d’Honneur from the French government; Honorary Membership in the Royal Academy of Music; and honorary doctorates from Duke University, Carnegie Mellon University, Harvard University, the University of Rochester, and The Juilliard School.

During the 2015-2016 season, Fleming is performing in concert and in recital in Australia, New Zealand, Canada, Austria, France, England, and the United States. In November, she stars as Hanna in Franz Lehar’s The Merry Widow at Lyric Opera of Chicago, where she has served as creative consultant since 2010 and is a member of the Board of Directors and also a Vice President. She is currently curating the creation of Bel Canto, commissioned by Lyric Opera and scheduled for its world premiere during the upcoming season.