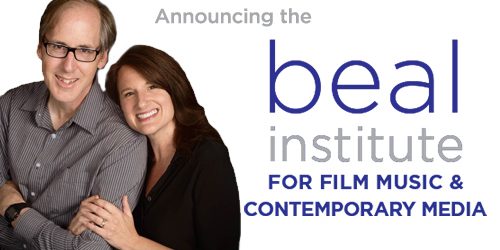 A $2 million commitment from Emmy-winning composer Jeff Beal and vocalist Joan Beal will launch the Beal Institute for Film Music and Contemporary Media at the University of Rochester’s Eastman School of Music, the couple’s alma mater, and build on the film legacy of the School’s founder, George Eastman.

The Beal Institute will provide students with instruction and experiences that prepare them for the increasing and evolving opportunities to write, produce, and perform music for film and contemporary media.

“Not only is there a need for education in composition across contemporary media platforms, there is a growing trend for orchestras and ensembles to perform this music in the concert hall,” said Jeff Beal. “Film music provides narrative connection, engages listeners, and can introduce new audiences to the power of the symphony orchestra. Eastman equips students with the artistry and deep skill sets needed to succeed across musical genres, and Joan and I are excited and proud to give our support.”

Jeff Beal, who received his Bachelor of Music degree with High Distinction in 1985, will serve as artistic director of the institute and will continue to be involved with the school, its students, and administration.

“This generous gift from Jeff and Joan connects the film legacy of the School’s founder, George Eastman, to a new era of opportunities in the music world,” said University of Rochester President and CEO Joel Seligman. “We are grateful for Jeff’s and Joan’s vision and support to enhance the Eastman School of Music’s preeminent role in preparing students to build lifelong careers.”

Industrialist and philanthropist George Eastman was the founder of Eastman Kodak Company; the company’s flexible roll film for still photography became the basis for the invention of motion picture film. Eastman’s love of music, and his conviction that it helped improve the community’s quality of life, led him to build the Eastman School of Music. The preparation of musical performance for silent film was a major course of study when the School opened in 1921. In addition, the School’s Eastman Theatre served as both a concert venue and as a “movie palace” for silent films with musical accompaniment when it opened in 1922. Jeff Beal’s grandmother Irene Beal performed for many years as a piano accompanist for silent films. It was her love of improvisation and jazz which first inspired Jeff as a young musician.

The Beal Institute for Film Music and Contemporary Media will provide support for student internships, scholarships, and projects; instruction; visiting artist residencies; and technology and infrastructure. Students will have opportunities to work with professionals who are actively engaged in writing for film and other contemporary media. They will be encouraged to collaborate on cross-disciplinary and multi-media projects with students and faculty from humanities, composition, and other Eastman School departments, as well as with community arts organizations and partnering universities. The Institute will also enhance the new Jazz and Contemporary Media graduate degree program in convergent artistry focusing on writing scores for film and other applications, such as video games.

“Music and musical styles continue to evolve, and the lines between genres continue to merge and dissolve,” said Jamal Rossi, the Joan and Martin Messinger Dean of the Eastman School of Music. “Jeff’s and Joan’s commitment will ensure that Eastman students have the preparation and versatility to engage with many styles of music and opportunities.”

“Eastman has always been dedicated to developing artists with the strong musical fundamentals needed across the professional music world,” said Joan Beal, whose career has spanned performances in opera, in concert with new music ensembles, and in recording studios as a singer on film and television scores and commercials. “My late father, Erwin Sapiro, is an Eastman alumnus. His career as a dedicated music educator has been my lifelong inspiration. Jeff and I are honored to invest in the School’s initiatives to get students ready for new and expanding career opportunities.”

From Eastman to Hollywood

One of the most prolific and respected composers for film, media, and the concert hall, Jeff Beal studied composition and trumpet at Eastman. Beal’s seven solo CDs, including Three Graces, Contemplations (Triloka), Red Shift (Koch Jazz), and Liberation (Island Records), established him as a respected recording artist and composer. Beal’s commissioned concert works have been performed by many leading ensembles, including the St. Louis, Rochester, Pacific, Frankfurt, Munich, and Detroit symphony orchestras. Kent Nagano commissioned and premiered two works, Alternate Route for trumpet and orchestra with Beal as soloist, and Interchange for string quartet and orchestra. Other commissions include the Lexington Chamber Music Festival, Metropole Orchestra (Netherlands), The Ying Quartet, The Debussy Trio, The Henry Mancini Institute, The Commission Project, and The Prism Brass Quintet. His first choral commission, The Salvage Men, is written for the Eric Whitacre Singers and The Los Angeles Master Chorale.

Jeff Beal received international recognition as a film composer after scoring Ed Harris’s Pollock in 2000. He composes, orchestrates, conducts, records, and mixes his own scores, which gives his music a very personal, distinctive touch. Jeff continues to receive critical acclaim for his compelling scores, including the ominous themes on the popular Netflix series House of Cards. A 15-time nominee for Emmy Awards in music, he has won three statues for his scoring work on Nightmares and Dreamscapes, The Company, and the theme for the USA Network series Monk.

Moviegoers and TV viewers have heard his compositions on countless productions, including the film Appaloosa, the theatrical documentaries Blackfish and The Queen of Versailles, the HBO series The Newsroom, Rome, and Carnivàle, and the television network series Ugly Betty.

Jeff Beal has arranged a House of Cards symphony as a multi-media production, with scenes from the series synchronized to the music. He workshopped the symphony at Eastman last spring with the student-run Empire Film Music Ensemble and plans to tour and conduct the production with orchestras around the world after the final version is premiered.

Joan Beal began her musical studies in trumpet and piano with her father, added vocal studies in high school, and pursued her vocal studies at Eastman. Recommended by voice professor Jan DeGaetani, who was world-renowned for her new music performances, Joan premiered many new works by composers such as Samuel Adler, Stephen Albert, Allan Schindler, and Richard Wernick. At the other end of the musical spectrum, she performed early vocal music as a member of Collegium Musicum under the tutelage of renowned lutenist and Eastman professor Paul O’Dette. She received her Bachelor of Music degree in 1984. Joan went on to perform with a variety of professional ensembles, including Musica Viva, Musica Sacra, the San Francisco Opera Company, and the Los Angeles Master Chorale.

As a studio singer, Joan Beal has sung on more than 100 film scores for composers including John Williams, James Newton Howard, and James Horner, and has done numerous national commercials and television series. She also serves as a vocal contractor and choral conductor for composers, selecting and coaching singers to enhance musical scores. Her collaborations with Jeff include vocals for the HBO series Carnivàle and Rome, and most recently, the operatic vocals on House of Cards.