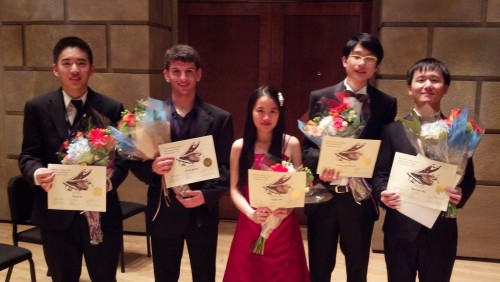 ROCHESTER, N.Y.– Brian Le, 17, of Silver Spring, Md,, was awarded first prize in the Eastman Young Artists International Piano Competition Saturday, July 18, following a stellar performance of the first movement Allegro maestoso of Chopin’s Concerto No. 1 in E Minor with the Rochester Philharmonic Orchestra under conductor Neil Varon. As the top winner in the event for talented 15-to-18-year-old pianists, held at the Eastman School of Music of the University of Rochester, Le was awarded the Gold Medal, a cash prize of $10,000, and a New York City Debut Concert on the DiMenna Center Piano Concert Series

Previously, Le won first prize in the Ylda Novik Memorial Concerto Competition, in the 27th International Young Artist Piano Competition, and in the 2014 Music Teachers National Association Senior Piano Duet Competition. He received second prize in the 2014 International Institutes for Young Musicians International Piano Competition, and was a finalist and received Honorable Mention in the 2015 National Symphony Orchestra Young Artists’ Competition. He has performed with the Charleston Symphony Orchestra and the Wintergreen Orchestra and presented solo recitals in such venues as the Kennedy Center Concert Hall and Kennedy Center Millennium Stage, Swarthout Recital Hall at the University of Kansas, the Alden Theatre in McLean, Va., and the Lied Center for the Performing Arts in Lincoln, Neb.

This year, 22 competitors from eight countries took part in the Eastman Young Artists International Piano Competition, Each presented two solo programs of recital repertoire and participated in a master class led by a member of the jury.  The five finalists were announced after the completion of the preliminary rounds on Thursday, July 16.

The competitors were adjudicated by a panel of judges consisting of Alvin Chow, the Ruth Strickland Gardner Associate Professor of Piano and chair of the piano department at Oberlin College & Conservatory, who chaired the jury; Argentine/American pianist Mirian Conti, an award-winning recording artist who organizes and adjudicates competitions and directs festivals; Ankie Foell, who won the Rotterdam Youth Piano Competition at age 13 and has presented concerts throughout the world; Alexandra Nguyen, assistant professor of collaborative piano at the University of Colorado Boulder, who has performed throughout North America; and Jack Winerock, professor of piano at the University of Kansas, who has performed in Europe, Asia, South America, and the United States.