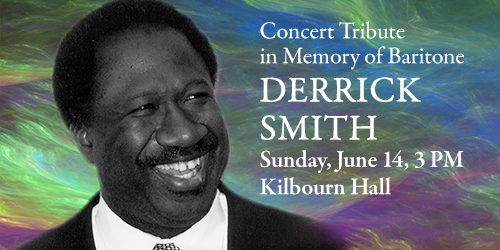 A memorial tribute concert celebrating the life of baritone Derrick Smith will be held at 3 p.m. Sunday, June 14, in Kilbourn Hall at the Eastman School of Music.

Mr. Smith, whose career included opera roles such as Porgy, Crown, and Jake in Porgy and Bess as well as acclaimed solo performances, had been on the faculty of the Eastman Community Music School (ECMS) from 1999 until his death in November 2014 at the age of 56.

Admission to the concert is free. Donations will be accepted for The Derrick Smith Memorial Education Fund.

Mr. Smith received his master’s degree at the Eastman School of Music in 1988 and was a frequent oratorio, opera, and concert performer throughout America and Europe.  In addition to his roles in Gershwin’s opera, which he sang in the United States and abroad with the Chicago Sinfonietta, Mr. Smith was frequently called to perform the role of Joe in Kern and Hammerstein’s Show Boat. His operatic appearances included Leporello in Don Giovanni in Malmö, Sweden, and the title role of Eugene Onegin in Russia. He originated the role of John Tubman in the premiere production of Harriet Tubman at the Metropolitan Museum of Art.

Mr. Smith gave acclaimed performances in Gershwin concerts at televised music festivals in Moscow and Estonia. He also performed at the International Institute of Vocal Arts in Italy and with the Rochester Philharmonic Orchestra, the Rochester Oratorio Society, the Long Island Symphony, and the Chamber Group of the Toronto Symphony, among others. He gave many performances of Handel’s Messiah, Mendelssohn’s Elijah, Mozart’s Requiem, and Brahms’s German Requiem in the Rochester area.