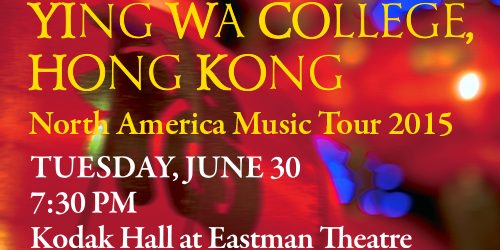 Four award-winning music ensembles from a historic Hong Kong school will give a free public performance in Kodak Hall at Eastman Theatre as part of the groups’ upcoming tour.

The ensembles’ conductors include Eastman School of Music graduate Gary Ngan, a violinist who received his Bachelor of Music degree at the school in 2009. He directs the string orchestra and appears as a soloist.

Ying Wa College is a boys’ secondary school established in Malacca in 1818 by the first Protestant missionary to China, Rev. Robert Morrison. The school was moved to Hong Kong in 1843.

The four ensembles coming to the Eastman School of Music were founded in the latter half of the 20th century. The Ying Wa College Chinese Orchestra, currently directed by Ted Hung, was established in 1971 and is one of the earliest Chinese orchestras created in secondary schools. The orchestra was awarded the gold medal in the first Winter Chinese Orchestra Festival and has received prizes in the Hong Kong Schools Music Festival, Hong Kong Youth Music Interflows, and New Tune Chinese Music Contest.

The Ying Wa College Choir was founded in the 1950s as the Chapel Choir and currently consists of the Treble, Intermediate, Senior and Senior Mixed Choirs. The ensemble now sings regularly in school assemblies and on public occasions in addition to services. The choir has won 14 championships in the Hong Kong Schools Music Festival since 2004, and was awarded the gold medal in the 2013 Winter Choral Festival. Music director Boron Li and Paulina Wong are the choir conductors and Connie Lau is the Treble Choir conductor.

The Ying Wa College Orchestra was founded in 1965 and is currently conducted by Hau-man Lo.  Also accompanying the ensembles on their North American tour, which includes concerts in Toronto and in Fredonia, N.Y., is assistant conductor Chris Choi.

During their Rochester appearance, the Ying Wa College Ensembles will be participating in master classes and rehearsing at the Eastman School of Music.