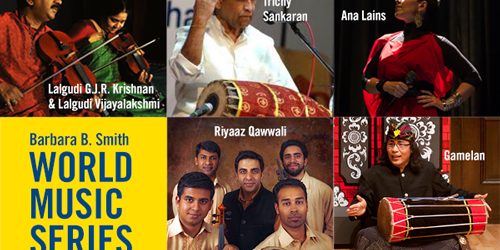 Guest artists will bring music from India, Portugal, and South Asia to the Kilbourn Hall stage as part of the World Music Series for 2015-2016.

The popular Eastman School of Music series will feature the violin duo of Lalgudi G.J.R. Krishnan and Lalgudi Vijayalakshmi on Wednesday, Sept. 23; Fado singer Ana Lains on Friday, Oct. 16; and the Riyaaz Qawwali ensemble on Wednesday, March 16, 2016. The season wraps up on Monday, April 25, 2016, with Balinese percussion performed by Eastman’s own Gamelan Lila Muni. All concerts are at 8 p.m. in the School’s Kilbourn Hall.

A subscription package to all four concerts is available at $48. Single tickets will be $15 to each concert. All single tickets and subscription tickets are general admission. Tickets go on sale Monday, June 1, and are available at the Eastman Theatre Box Office, 433 East Main St.; by phone, 585-454-2100; or online at eastmantheatre.org.

Siblings Lalgudi Krishnan and Lalgudi Vijayalakshmi follow in the stylistic footsteps of their famed father, Shri Lalgudi Jayaraman, in the performance of Indian Carnatic music. The two blend traditional and innovative elements to bring out the emotions, moods, and essence of the songs and compositions in their rich and creative repertoire. They will be joined by world-renowned percussion virtuoso, Indian music scholar, and composer Trichy Sankaran on the mridangam.

Lains is a rising star in the performance of Portuguese fado, mournful songs and lyrics that follow a traditional structure. Praised for her strong singing, interpretation, and ability to connect with audiences, Lains has appeared in the United States, Germany, France, Belgium, Italy, Switzerland, the Czech Republic, Austria, and Luxembourg. Her discography includes the albums Sentidos, Quatro Caminhos, and Coast to Coast, and she recorded a duet on Boy George’s album Amazing Grace. Lains will be joined by fado singer Pedro Galveias on the Kilbourn Hall stage.

The eight musicians of Riyaaz Qawwali, who live in the United States, originally hail from India, Pakistan, Afghanistan, and Bangladesh and are trained in eastern and western classical music. The qawwali musical tradition dates back to the late 13th century and is characterized by rhythmic cycles, gripping melodies, and the addition of poetry. Riyaaz Qawwali has performed across the continental United States and in Panama.

Gamelan Lila Muni (Heavenly Sound) is a percussion ensemble of metallophones, gongs, drums, and flutes that presents a variety of music and dance from the Indonesian island of Bali, ranging from traditional and ceremonial music to modern secular dances. The ensemble is composed of members of the Rochester community as well as students and faculty from the Eastman School of Music and the University of Rochester’s River Campus.

The World Music Concert Series is sponsored by a generous gift from Barbara B. Smith.