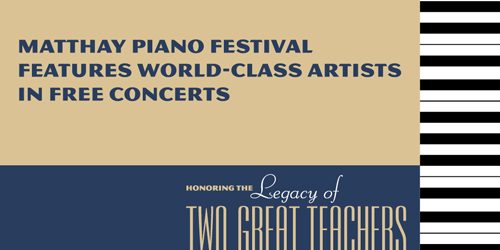 Local patrons of piano music have the opportunity to hear world-class performers in free recitals when the Eastman School of Music hosts the 2015 Matthay Piano Festival June 8 to 11. The events are sponsored by the American Matthay Association, an organization devoted to promoting the principles of renowned piano pedagogue Tobias Matthay.

Born in London in 1858, Matthay taught piano at the Royal Academy of Music for more than 50 and established his own piano school in 1905.   In the 20’s and 30’s many American pianists studied with him at his school leading to the establishment  in 1925 of the American Matthay Association. His teaching method stressed proper piano touch based on analyses of the piano’s mechanisms and arm movements, and knowledge of both the physiological and psychological aspects of piano performance.

During the daytime, festival participants will attend lectures, demonstrations, master classes, and lecture/performances. All recitals are free and open to the public and will be held at 8 p.m. in the Eastman School of Music’s Kilbourn Hall. The recital schedule features:

Snyder was a triple-prize winner at the 1966 Van Cliburn International Competition, receiving the Silver Medal as well as the Pan-American Union and Chamber Music awards. He has performed in festivals and with numerous major orchestras around the world, and given master classes across Asia, Europe, Australia, and South America. Snyder received the Diapason D’or for recordings of the complete cello and piano works by Fauré with Steven Doane. He received both his bachelor and master of music degrees at Eastman, where he studied extensively with Genhart. A member of the Eastman faculty since 1970, Snyder is a recipient of the University of Rochester’s Edward Peck Curtis Award for Teaching Excellence.

As a solo recitalist, Smith made his European debut at Mariefred Kyrkan in Sweden in 1997, where he received a standing ovation. He has appeared with orchestras in England and Sweden and given recitals in London, Stockholm, Leipzig, Wittenberg, and in the United States in Maryland, Ohio, New Jersey, Virginia, California and New York. he has appeared as a soloist, chamber musician and vocal accompanist at such venues as the National Gallery in Washington, D.C., the Cleveland Museum’s Distinguished Artist Series, and Alice Tully Hall at Lincoln Center in New York City. Smith’s debut recording of the Kurt Atterberg Concerto (a premiere recording) was released in September of 1999.

Rutman has performed in more than 30 countries in Europe, Asia, and the Middle East. He has appeared in Carnegie Hall, Alice Tully Hall, Queen Elizabeth Hall, Wigmore Hall, Tokyo’s Bunka Kaikan, and the Schola Cantorum in Paris, with recent concert tours of the United Kingdom, Europe, New Zealand, Japan, and the Persian Gulf. He has been as a top prize winner in several international competitions including the Busoni, Kapell, Casadesus, Joanna Hodges, Concert Artist Guild, first prize for his performance of the Goldberg Variations at the International Johann Sebastian Bach Competition, and recently, first prizes in two categories at the French Piano Institute International Competition in Paris.

Since touring with the Northern Youth Orchestra of Great Britain at the age of nine, Tryon has played in most of the major concert halls and with many of the leading orchestras and conductors in Britain and has appeared throughout North America. Her repertoire ranges from Bach to contemporary composers, and she is well known for her sensitive interpretations of the romantics, particularly Chopin, Liszt, and Rachmaninoff.  Tryon was an early recipient of the Harriet Cohen Medal and the Hungarian Minister of Culture awarded her the Liszt Memorial Plaque in recognition of her lifelong promotion of Franz Liszt’s music. She is currently Artist-in-Residence at McMaster University in Canada.

As a Fulbright scholar in England, Razaq performed at Wigmore Hall in London, where she received excellent reviews. She was an award winner in the Maria Canals International Competition in Barcelona. Razaq is heard on WFMT and Minnesota Public Radio, plays concertos with regional orchestras, and has appeared as a soloist across the country. Her recent performances/presentations have included an appearance at the Canadian Federation of Music Teachers Association National Conference in Halifax, Nova Scotia. She is Director of Keyboard Studies at William Rainey Harper College in Palatine, Ill., presents lecture recitals on various topics for area music teachers groups, and is in demand for judging auditions and competitions.

Piano Recital by Valerie Tryon. Works by Haydn, Mozart, Chopin, Liszt, and others.