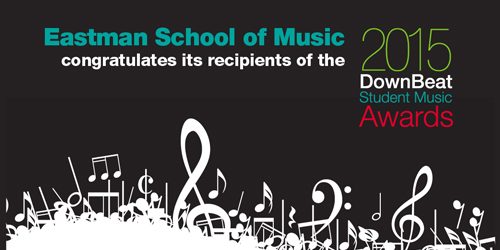 The awards were announced in the June issue of DownBeat, one of the country’s most respected jazz magazines and often called “the bible of jazz.” Entries for the annual Student Music Awards are judged on musicianship, creativity, improvisation, technique, sound quality and balance, excitement, authority, and other criteria. The judges include editors of DownBeat, professional musicians, and educators.

Reynolds describes “Our Time” as a reflection on how people spend their time in this world. The 12-minute piece was recorded during Reynolds’s recital in November 2014, and features Evan Burrus, alto saxophone; Matthew Sieber-Ford, tenor saxophone; Julian Garvue, piano; Emiliano Lasansky, bass; Michael Craig, drums; and Lanighan on trombone and Reynolds on flugelhorn. Reynolds, a member of the class of 2016, is a jazz trumpet major.

Lanighan also plays trombone on his winning five-minute arrangement of “Lament,” which was written by famed American trombonist J. J. Johnson. The work was recorded during a jazz department forum in October 2014 and features Shoghi Hayes, trumpet; Mike Forfia, bass; Michael Craig, drums; and Garvue on piano and Tanaka on clarinet. Lanighan will receive his bachelor’s degree in jazz trombone and music education this month. In the fall, he will be student teaching at Williamsville East High School, gigging, and continuing to teach his private students.

Condon’s arrangement of the Duke Ellington standard “In a Sentimental Mood” was inspired by a 1963 recording of the work featuring John Coltrane and Ellington. The seven-and-a-half minute work was recorded during a March 2014 concert by the Eastman Studio Orchestra, featuring Marc Abrate as baritone saxophone soloist and Condon as guitar soloist. Condon, who is receiving his master’s degree in jazz writing this month, is releasing his debut album on June 22. He will be pursuing a performing career in New York City after graduation.

“Orbit” (Unless It’s You) is a rarely performed Bill Evans work originally written for a jazz piano trio which appears on the jazz pianist’s 1966 album “A Simple Matter of Conviction.” Tanaka arranged it for a big band, and the five-and-a-half minute work was recorded during an Eastman Jazz Ensemble concert in fall of 2014. Featured soloists were Garvue on piano; Condon on guitar; Tanaka on clarinet; and Aaron Eckert, euphonium. Tanaka will be continuing his studies next year as a master’s degree student in jazz writing.