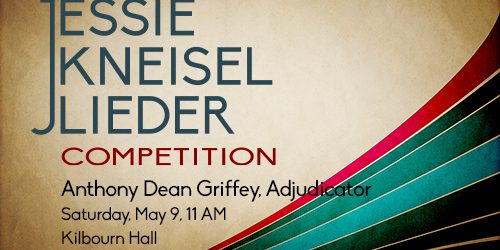 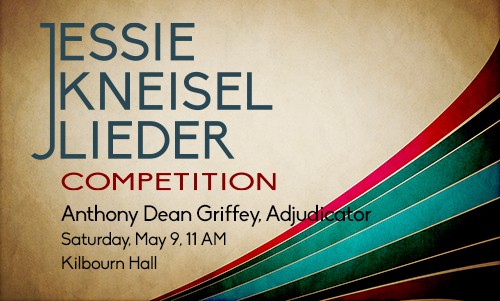 Six Eastman School of Music voice students and six piano and accompanying students will compete in the school’s 34th annual Jessie Kneisel Lieder Competition starting at 11 a.m. Saturday, May 9, in Kilbourn Hall. This year’s adjudicator is acclaimed tenor Anthony Dean Griffey, who joins the school’s faculty in the fall as Professor of Voice.

The annual competition, which highlights the German art songs that figure prominently in vocal recitals at Eastman, was started by alumnus George McWhorter (BM ’57) to honor Jessie Kneisel. Dr. Kneisel taught courses in German, German diction, and German libretti for 45 years beginning in 1931. She also served as Dean of Women. The Jessie Kneisel Prizes in German Lieder are given each year to outstanding singers and collaborative pianists.

Each Eastman singer/pianist team will present a 20-minute program in the order listed above. Winners will be announced after the completion of the competition. First, second, and third places are given separately to singers and pianists. The first-place pianist receives an award in memory of Ann Clark Fehn, given by Udo Fehn and Margaret V. Clark. The singer awarded first prize will present a Winner’s Concert with his or her pianist at 8 p.m. on Saturday, May 16, in Kilbourn Hall.

Griffey received a Performer’s Certificate and his Master of Music degree at Eastman. Acclaimed for his dramatic interpretation as well as his powerful lyric tenor voice, he has performed on opera, concert, and recital stages around the world. His signature roles include the title role in Britten’s Peter Grimes; Lennie in Carlisle Floyd’s Of Mice and Men; and Mitch in André Previn’s A Streetcar Named Desire.

As a concert performer, Griffey made his Carnegie Hall’s Zankel Hall recital debut in 2004, where André Previn composed and dedicated a song cycle for him and accompanied him on the piano. Griffey appears regularly with many distinguished international orchestras such as the New York Philharmonic, Boston Symphony, Berlin Philharmonic, London Symphony, Orchestre de Paris, Japan’s Saito Kinen Orchestra, and more.

Griffey’s extensive discography includes the Los Angeles Opera’s The Rise and Fall of the City of Mahagonny, which earned him two Grammy awards, and Mahler: Symphony No. 8; Adagio from Symphony No. 10, for which he also received two Grammys.