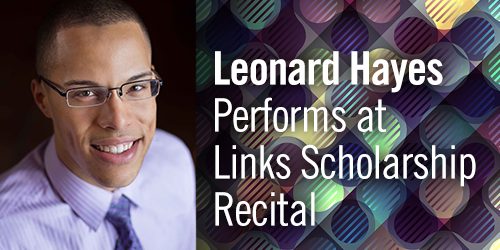 Pianist Leonard Otis Hayes, this year’s recipient of the annual scholarship awarded by the Rochester, New York Chapter, The Links, Incorporated, to an Eastman School of Music student, will present a recital at 3 p.m. Sunday, April 26, in Kilbourn Hall.

The award, a cooperative effort between the Rochester, New York Chapter, The Links, Incorporated, and the Eastman School of Music, recognizes and celebrates the extraordinary talent and academic achievement of an African-American scholar musician.

Hayes’s recital is free and open to the public. He will be joined by fellow Eastman student Mary Russek, a violinist, in select movements from Brahms’s Violin Sonata Op. 78 in G major. Hayes’s longtime colleague Derrell Acon, a lyric bass who is a doctoral student at the College-Conservatory of Music at the University of Cincinnati, will join him to perform “Come dal ciel precipita” from Verdi’s Macbeth, Howard Swanson’s “The Negro Speaks of Rivers,” and an arrangement of “Deep River” by Moses Hogan.  In addition, Hayes’s solo performances include Beethoven’s Piano Sonata Op. 31 No. 2 in D minor; George Walker’s Piano Sonata No. 1; and Liszt’s Mephisto Waltz No. 1 in A Major.

Hayes has performed in solo master classes for acclaimed pianists such as Richard Goode, Robert McDonald, Jon Kimura Parker, Nelita True, Jade Simmons, and Gilbert Kalish. In March 2011, he was invited to perform in both solo and collaborative master classes at the Music Teacher’s National Association Convention, with Robert Weirich and the duo of Warren Jones and Denyce Graves. As a summer music festival participant, Hayes attended the Adamant Music School, the Green Lake Music Festival, and the Gijon International Piano Festival.

Hayes earned a Bachelor of Music Degree from Lawrence University, where he studied under the guidance of Catherine Kautsky and Dmitri Novgorodsky. He also studied abroad at the Conservatorium van Amsterdam with Dutch pianist Matthijs Verschoor.

Currently, Hayes is pursuing a Master of Music Degree in Performance and Literature at the Eastman School of Music in the studio of Douglas Humpherys. At Eastman, Hayes serves as a graduate assistant in studio accompanying and is a residential advisor in the Eastman Student Living Center.

The Links, Incorporated, founded in 1946, is one of the oldest and largest volunteer service organizations of women who are committed to enriching, sustaining and ensuring the culture and economic survival of African Americans and other persons of African ancestry. The Rochester, New York Chapter, The Links, Inc. was established in 1984 and supports programs in the arts, services to youth, national trends and services, international trends and services, and health and human services.