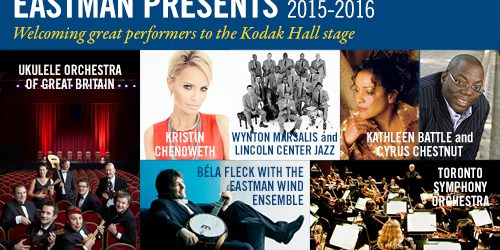 Emmy and Tony Award-winning actress and singer Kristin Chenoweth, the Jazz at Lincoln Center Orchestra with Wynton Marsalis, and premier banjo performer Béla Fleck as guest soloist with the Eastman Wind Ensemble under conductor Mark Davis Scatterday, are among the headliners for the second season of Eastman Presents. The 2015-2016 series was announced by the Eastman School of Music.

The line-up for next year’s series of monthly concerts continues presenting international artists from a variety of musical genres. The Ukulele Orchestra of Great Britain has entertained audiences for 30 years with a mixture of popular and highbrow music that is amusing at times, moving at other times. Soprano Kathleen Battle, a five-time Grammy winner whose repertoire ranges from Baroque to contemporary works, performs with symphony orchestras and in recital halls around the world, and will be appearing with pianist Cyrus Chestnut. Next season’s series wraps up with one of Canada’s most important cultural institutions, the Toronto Symphony Orchestra under conductor Peter Oundjian; the orchestra will be joined by Gramophone Artist of the Year pianist Angela Hewitt.

All performances are in Kodak Hall at Eastman Theatre. The 2015-2016 season line-up is:

A group of all-singing, all-strumming ukulele players, the orchestra reinterprets all genres of music. From Tchaikovsky to Nirvana via Otis Redding and Spaghetti Western soundtracks, the ensemble gives listeners “One Plucking Thing After Another.” Formed in 1985, the orchestra has become something of a national institution that has given thousands of sold-out concerts across the world, including Germany, Finland, Poland, the United States, Canada, New Zealand, Australia, and Japan.

Earning standing ovations from sold-out crowds in Carnegie Hall, Royal Albert Hall, Sydney Opera House, and venues around the world, Chenoweth has built a career that also encompasses film, television, and recordings. She won a Tony in You’re A Good Man, Charlie Brown, and her movie appearances include roles in The Pink Panther, Deck the Halls, Bewitched, Running with Scissors, and The Boy Next Door. On television, Chenoweth’s been seen in an Emmy-winning role in Pushing Daisies as well as in Glee, The West Wing, and PBS specials. Her concert performance Kristin Chenoweth: Coming Home was released as a CD and DVD.

The Jazz at Lincoln Center Orchestra, led by Wynton Marsalis, is made up of 15 of the leading soloists, ensemble players, and arrangers in jazz music today. DownBeat has described them as “not just a band on tour, but a religious congregation, spreading the word of jazz.” The orchestra performs an extensive repertoire of original compositions by Marsalis and orchestra members as well as masterworks of Ellington, Mingus, Coltrane, and others.

Though known for his jazz performances ranging from News Orleans to bebop to modern jazz, Marsalis also pursued a career in classical music. He is the first jazz musician to win the Pulitzer Prize for Music. In 1983, he became the first and only artist to win both classical and jazz Grammys in the same year for Trumpet Concertos: Haydn, Hummel, Mozart and Think Of One, repeating that achievement in 1984.  His 1986 CD with the Eastman Wind Ensemble, Carnaval,  received a Grammy nomination. Marsalis is a bandleader, educator, co-founder of the Jazz at Lincoln Center program, and a prolific and inventive composer whose oeuvre includes music for Garth Fagan.

Battle has performed in opera houses and concert halls around the world. She has also performed spirituals with Jessye Norman and was joined by leading jazz musicians for her first crossover album So Many Stars. The winner of five Grammys, she has appeared before Presidents and dignitaries and has attracted new audiences through television broadcasts of her operas and concerts, as well as through popular network talk show appearances.

Battle will be performing a program titled “Underground Railroad: A Spiritual Journey.” In addition to pianist Chestnut, who has joined her on tours since 1995, Battle will be joined by the Rochester Festival Chorus under Jason Holmes, conductor.

Fleck, who has been nominated in more different Grammy musical categories than anyone else, is a creative force in bluegrass, jazz, pop, rock, and world beat. His 2001 album Perpetual Motion was Grammy’s Best Classical Crossover Album. Fleck co-wrote a double concerto for banjo, bass, and the Nashville Symphony as well as a triple concerto for banjo, bass, and tabla, an Indian drum. He has performed with artists as varied as Chick Corea, bassist Edgar Meyer, Brooklyn Rider string quartet, The Marcus Roberts Trio, African artists Oumou Sangare and Toumani Diabate, and others.

Founded in 1922, the Toronto Symphony Orchestra is recognized internationally for its commitment to innovative programming and audience engagement through a broad range of performances. Over the past decade, the TSO has toured in Canada and the United States, including two sold-out appearances in Carnegie Hall. In August 2014, the orchestra completed a critically acclaimed European tour which included the first performances of a North American orchestra at Reykjavik’s Harpa Hall.

Hewitt is one of the world’s leading pianists, regularly appearing in recital and with major orchestras throughout Europe, the Americas, and Asia. Her performances and recordings of Bach have drawn particular praise, marking her as one of the composer’s foremost interpreters of our time. She was Gramophone’s Artist of the Year in 2006 and Instrumentalist of the Year in the 2010 MIDEM Classical Awards.