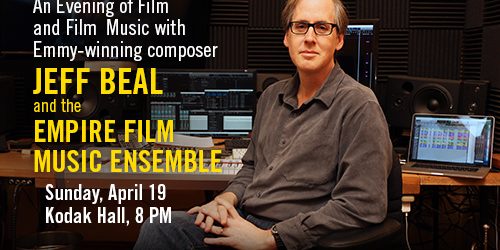 Jeff Beal, one of the most prolific and respected composers for film, television, and the concert hall, returns to his alma mater in April and will headline a concert of film screenings accompanied by live music.

Critically acclaimed for his atmospheric scores, Beal created the ominous dissonance on House of Cards, the political thriller on Netflix. His music enhanced the romantic and historical stories on CBS’s The Dovekeepers and added to the horror and suspense of the Battleground episode on TNT’s Nightmares and Dreamscapes.

Scenes and music from those series will be featured in “An Evening of Film and Film Music” at 8 p.m. Sunday, April 19, in the Eastman School of Music’s Kodak Hall at Eastman Theatre.  The concert, which is free and open to the public, includes excerpts from the 1926 Buster Keaton silent film The General, which Beal also has scored. Additional silent film and music highlights include The Phantom of the Opera and the documentary short How the Cowboy Makes His Lariat. Music accompanying Phantom was arranged by Eastman Professor Emeritus Donald Hunsberger from silent film music cue sheets; 2014 Eastman graduate Dylan Price wrote the music for the documentary short.

The Empire Film Music Ensemble will perform the music live to picture.  The group, formed by Eastman and University of Rochester students to prepare musicians to play in the film industry, will be conducted by Beal, Hunsberger, and Eastman senior and ensemble co-founder Michael Staffeldt.

From Eastman to Hollywood

Beal studied composition and trumpet at the Eastman School of Music and received his Bachelor of Music degree with High Distinction in 1985. While an Eastman student, he won an unprecedented 11 awards from DownBeat magazine recognizing his skills as a jazz trumpeter, composer, and arranger.

A 14-time nominee for Emmy Awards in music, Beal won three statues for his work on Nightmares and Dreamscapes, the documentary Peggy and Dorothy, and the USA Network series Monk.  Moviegoers and TV viewers have heard his compositions on countless productions, including the films Pollock and No Good Deed, the theater documentaries Blackfish and The Queen of Versailles, the HBO series The Newsroom, Rome, and Carnivále, and the television network series Ugly Betty and Medium.

Beal’s concert music has been performed by many leading orchestras, including the St. Louis, Pacific, Frankfurt, Munich, and Detroit Symphonies. He has received commissions from artists such as clarinetist Eddie Daniels, The Ying Quartet, and conductor Ken Nagano, for whom Beal wrote “Alternate Route” for trumpet and orchestra, and performed as the soloist for the premiere. His CD recording titles include Alternate Route, Three Graces, Contemplations, and Red Shift.

The family that plays together

Beal and his wife, professional vocalist and Eastman graduate Joan Beal, will spend several days in-residence at Eastman leading up to the concert.  They’ll both speak to students about studio musician careers in Los Angeles. In addition, Jeff Beal and Hunsberger will hold a session on approaches to film scoring. Jeff Beal will also speak to students in a film history class at Eastman and in the School of Film and Animation at Rochester Institute of Technology.

While a student at Eastman, Joan Beal premiered many new works by composers such as Samuel Adler, Stephen Albert, Allan Schindler, and Richard Wernick.  She also performed early vocal music as a member of Collegium Musicum under the tutelage of renowned lutenist and Eastman professor Paul O’Dette. She received her Bachelor of Music degree in 1984.

Joan Beal performed with many professional vocal ensembles, including Music Sacra and the New York Philharmonic Chorus, appeared as a soloist with the New York Philharmonic, and was a frequent guest artist with new music ensembles Composers, Inc., Earplay, and the San Francisco Contemporary Music Players. As a studio singer, she has sung on more than 100 film scores, numerous national commercials and television series,  and has appeared on-camera singing in the television programs Ally McBeal and Nothing Sacred. She appeared in two PBS televised operas with San Francisco Opera: La Bohème and Mephistopheles.

The Beals perform together on many of Jeff Beal’s scores; the House of Cards soundtrack, for example, features Jeff on trumpet, piano, and synthesizer, Joan singing, and son Henry, who’s in college, playing the bass.

Calendar Listings of events free and open to the public

21st Century Toolkit for Singers and Improvising a Life. Joan and Jeff Beal speak about life beyond Eastman.