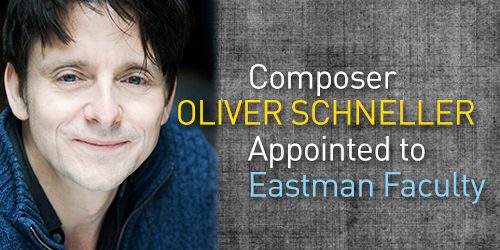 Oliver Schneller, who has directed and curated festivals and collaborative arts projects over the course of his wide-ranging career, has been named Professor of Composition and Director of the Eastman Computer Music Center at the Eastman School of Music.

Born in Germany, Schneller grew up in Africa, Europe, and Asia and studied in Germany and the United States, and his works reflect his interest in all aspects of interculturality in music. He is the recipient of such prestigious honors as Harvard University’s Paul Fromm Award, the Tanglewood Music Center’s Benjamin Britten Memorial Fellowship, the Rome Prize Fellowship, the Ernst von Siemens Music Foundation’s Composers’ Prize, and more.

“We are delighted that Oliver Schneller will join our composition faculty and look forward to a new and exciting chapter for the Eastman Computer Music Center under his stewardship,” said Carlos Sanchez-Gutierrez, chair of the composition department. “Oliver is an erudite and versatile composer whose music combines elegance and clockwork precision with expressive depth.  He is a true global composer, with interests that include the music of Europe, Japan, and the Middle East, as well as inter-arts work and new technologies.  He is also a gifted and inspiring teacher and mentor, and has spearheaded a number of innovative projects for new music in the United States, Germany, Japan, and elsewhere.”

Schneller developed and expanded the Computer Music Studio at the City University of New York. As a composer-in-research at IRCAM, a French institute for science about music, sound, and electro-acoustical art music, he worked on “Jardin des Fleuves,” a work for ensemble and live-electronic spatial processing. He has taught seminars and master classes on composition, orchestration, and compositional applications of acoustics and psychoacoustics at Cornell University, the University of the Arts in Berlin, the Norwegian Theatre Academy, and Kunitachi College of Music in Tokyo, and has served as professor of composition at the State University of Music and Performing Arts in Stuttgart and at the Hannover Conservatory of Music.

In 2004, Schneller was the artistic director of the “Tracing Migrations” Festival in Berlin, which featured the works of contemporary composers from Arab countries. The following year, he curated the “The Musical Moment” at Berlin’s House of World Cultures, a project that explored Eastern and Western concepts of musical beauty involving composers Toshio Hosokawa and Helmut Lachenmann. In addition, Schneller designed the 48-channel sound installation that was part of an exhibition on Islamic and modern worlds prepared by TASWIR Projects.

Schneller is a co-founder of the SinusTon Festival for Experimental Music, for which he also serves as artistic director, and of the composers collective “Biotope.”

As a saxophonist, Schneller has performed with ensembles such as the George Russell Big Band, the Gustav Mahler Youth Symphony under Seiji Ozawa, and the Tanglewood Music Center Orchestra as a soloist in Tan Dun’s Red Forecast. He also has worked with various jazz and improvisations ensembles in Cologne, Paris, Amsterdam, Boston, and New York.

Schneller earned degrees at the University of Bonn and the New England Conservatory of Music, as well as the Doctor in Musical Arts degree in composition from Columbia University.

“I am so pleased to become a part of the Eastman community and look forward to working with the students and faculty at this wonderful school,” said Schneller. “It’s an honor and inspiration to assume the helm of the studio Allan Schindler has so expertly built over the last decades. In the years to come, I hope to continue building on this foundation, while opening some new avenues in creative music technology, specifically in the direction of cross-disciplinary collaboration and research-oriented perspectives.”