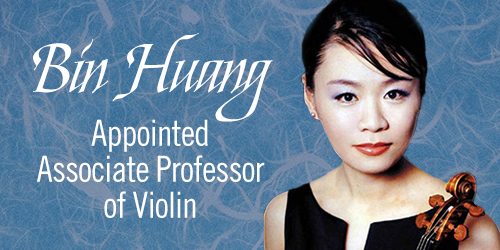 ROCHESTER, N.Y.–Internationally lauded violinist Bin Huang, whose prestigious competition wins include the Paganini and Munich International contests, will return to her alma mater as Associate Professor of Violin at the Eastman School of Music of the University of Rochester.

Huang has built a concert career appearing with leading orchestras and in leading venues around the world. As a chamber musician, she has played in the Marlboro Music Festival with members of the Beaux Arts Trio and the Juilliard and Guarneri String Quartets. Her live performances as well as her recordings have earned praise for her technical abilities and interpretation.

“Bin’s record as a competition prize-winner is simply outstanding,” said Federico Agostini, co-chair of the Strings, Harp and Guitar Department at Eastman. “She is undoubtedly a formidable performer but also someone endowed with admirable intellectual qualities, kindness and simplicity as a human being. I am very happy about Bin joining the Eastman violin faculty.”

At the age of four, Huang received a violin from her father and began her studies in her hometown of Changsha, China. She entered the Central Conservatory of Music in Beijing at age nine. After graduation, she came to the United States and studied at the Peabody Conservatory of Music, where she earned a Bachelor of Music degree and the Artist Diploma. Huang received her Master of Music and Performer’s Certificate and Doctor of Musical Arts at Eastman.

“I am extremely thrilled to return to Eastman as a faculty member. To me, it is the ideal place for musical and artistic development, where performing and academic studies purposefully complement each other,” said Huang. “During my student years, I enjoyed immensely the supportive atmosphere among students and faculty members, and I felt very much at home in this warm and friendly community. I look forward to sharing my knowledge and expertise in violin playing with the students, and helping them to take full advantage of the amazing opportunities that Eastman and the Rochester community offer.”

Since embarking on her professional career at 23, Huang has performed with the Czech Philharmonic, Orchestre National de France, Baltimore Symphony, Korean Broadcasting System Symphony Orchestra, Bavarian Radio Symphony, St. Petersburg Chamber Orchestra, Cape Town Symphony, Shanghai Symphony, and other orchestras. She has been hailed as “a talent that leaves a listener flabbergasted” by the Baltimore Sun and “a winner in what matters the most” by the Washington Post.

Huang has appeared at such prestigious venues as Lincoln Center, Concertgebouw, Berlin Philharmonic Hall, Kennedy Center, Opera City in Tokyo, Great Hall of Moscow Conservatory, and the People’s Great Hall in China. She was invited to play in the Inauguration Concert at the China National Performing Arts Center in Beijing and was one of the “Ten Most Celebrated Violinists” featured on China Central TV.

Her recordings also include Baroque Violin Favorites, which was named an Editor’s Choice in American Record Guide, and The Christmas Story.

“Bin Huang is not only a world-renowned virtuoso, but a person of great intelligence, character, and humanity,” said James VanDemark, co-chair of the Strings, Harp and Guitar Department at Eastman. “I look forward to having her as my colleague at Eastman.”